Those poop balls – the ecology of dung beetles

Written and photographed by: Vaughan Jessnitz

Dung beetles are one of the more intriguing and spoken about beetles within the guiding world, and many thousands of safari-goers have seen the seemingly tireless efforts these little beetles put into creating and rolling their balls of poop around!

During most of the drier winter months they have been in a state of torpor, waiting for summer, and more importantly, the first rains to arrive. Soon afterwards we can once again hear the bush buzzing with the wing beats of these flying decomposers! 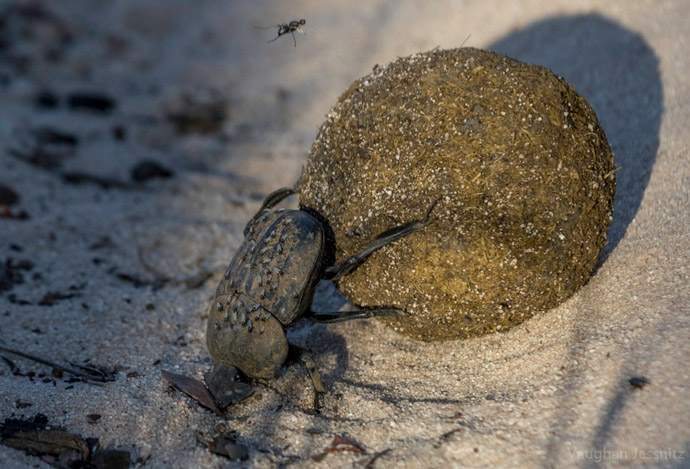 It’s with good reason that dung beetles get this attention, as they are vitally important to the environment. They clean up the majority of dung during the summer season and help decompose and return the organic matter back into the ground as nutrients. However, not all dung beetles make dung balls – in fact most species just dig a hole directly under the dung and will not be seen rolling poop around! To make things simpler, dung beetles can be broken down into four distinct groups, telecoprid, endocoprid, paracoprid and kleptocoprid. 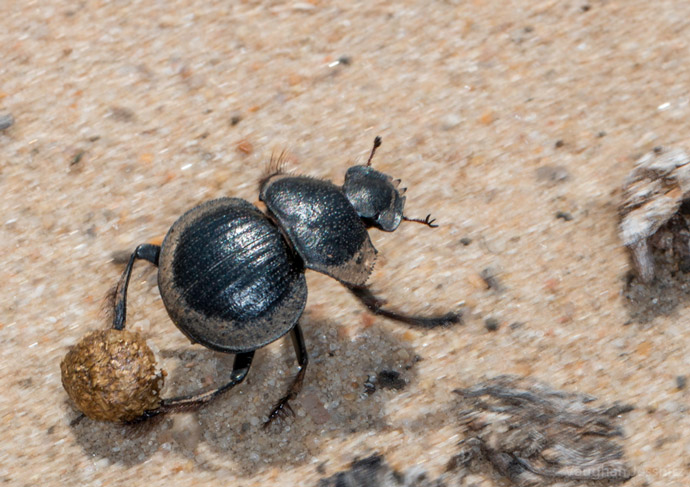 The telecoprid dung beetles are the ones we find the most often with their dung balls as they are the most conspicuous. Their eggs are laid into these dung balls (referred to at this stage as the ‘brood ball’) and rolled away until they find a suitable place to dig a hole and bury it. They will then go back to the original pile to roll another and then roll it back to the same hole placing it on top of the first ball. They may place up to three balls on top of each other before closing the top of the hole and then leaving the larvae to hatch, feed and change into their adult form!

Although the first ball in the hole has the first laid egg, it is the last ball that has the first hatchlings, then the second ball and lastly the first ball. This prevents any unwanted traffic on the way up to the surface! Dung beetles range in size from a tiny 5mm to an impressive 50mm and there are often many different species of dung beetles in a single pile of manure! 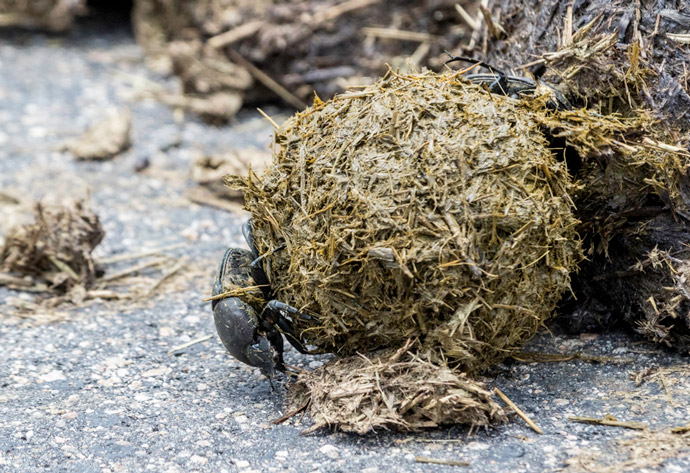 These beetles are also very diverse in looks, varying not only in colour from black to blue to copper, but also shape, from big round armoured looking beetles, to faint long-legged spider-like dung beetles! Even the ancient Egyptian scarabs for example, are actually images of dung beetles. The beetles generally have a lifespan of approximately two-three years. Their eggs, which are laid in the dung, hatch into larvae which eat the solid matter surrounding them. The adults generally only drink the liquid nutrient which is present in the dung. 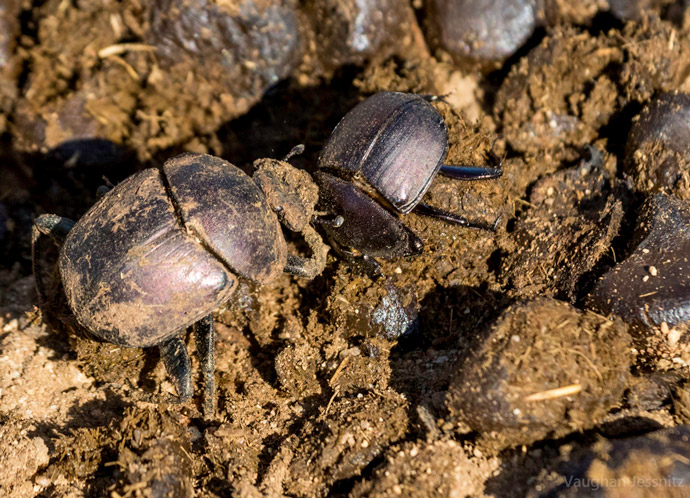 Some dung beetles have evolved to become very specialist in their ways, losing the ability to fly, or becoming very specific on the kinds of dung they choose. These beetles are a lot more prone to habitat destruction, and environmental change. The sad part about this is we generally do not really know much about these rarer beetles (other than maybe the flightless Addo dung beetle).

Most of these ‘specialist beetles’ go totally unnoticed, and unprotected. For example, in the dry, arid regions of Namaqualand and Namibia, there is a type of dung beetle that doesn’t actually roll a ball at all, but collects antelope, hare and other dung pellets, clasps them between its back legs and literally gallops across the sand pulling its loot behind it!

There are many more such examples, and for what we know, many species have been lost already. But maybe we can change that? Let’s leave the Big Five for a moment, and focus a little more on the small 5,000! This is what we try teach our Bushwise students when they are on the course and in turn we hope to inspire them to educate their guests!