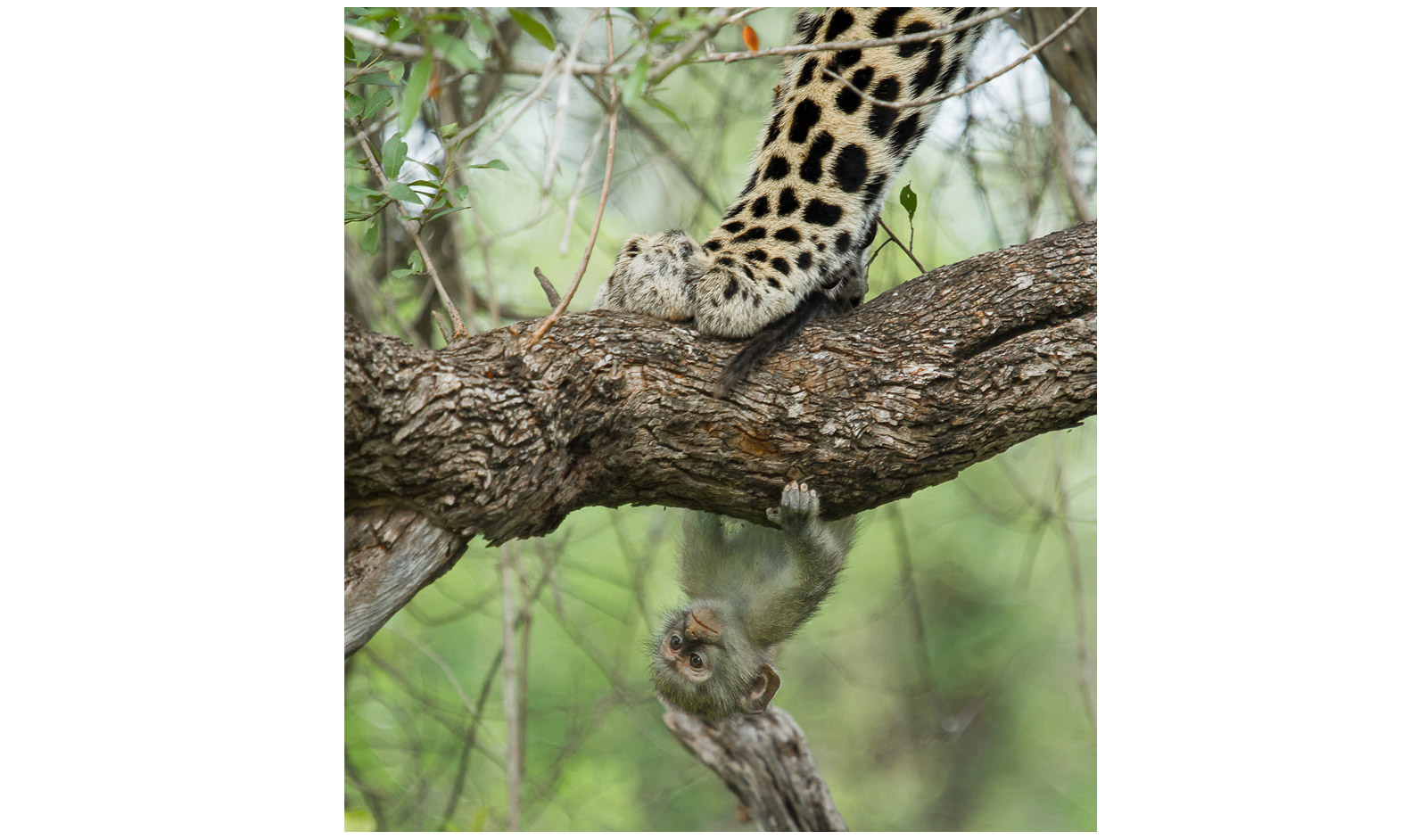 Photographer Chris Renshaw describes the situation leading up to and after the image was taken: The sound of vervet monkeys alarm calling always sparks a rush of adrenalin in any guide. Something is happening. A predator of sorts has been sighted, and the manic calls send a rippling wave of warning through the troop ranks. A leopard! A fellow guide had heard the same alarm calls and got there just as the Ravenscourt young male leopard was catching his very first vervet monkey. It was a very young monkey, an infant and could not have been more than a few weeks old. He caught it with what every cat has; instinct, speed, agility and the ability to seize an opportunity. The mother vervet had momentarily left the ground to investigate some fruit not 5 metres away when the leopard charged in. He did not kill it but proceeded to play with his quarry. Tossing it up and down, pawing, licking and jabbing it, climbing trees and dropping it, only to pounce on the shell-shocked monkey repeatedly. It was heart-wrenching to watch, but we all knew that this was nature at its most raw, and sat transfixed. With the cries of the mother and the rest of the troop nearby, the infant held on to life and fought for freedom valiantly. This was when the photographic opportunity of a lifetime presented itself. The young male leopard trapped the monkey on the branch, the monkey looked up at its mother, and the look on its face described the heartache and desperation it was experiencing. The definition of life and death.
A sharp growl from the mother leopard indicated that something else was to add to the dynamic. From behind our vehicle, an adult hyena suddenly appeared. The cub (monkey in tow) and mother dashed up a tree with the hyena skulking in for any signs of scraps. The growling continued until the hyena realised that there was no meal to be had, and it casually lay down 10 metres away below the tree.
This prompted the young male leopard to begin to play with his quarry once again, as mother watched on impatiently. All of a sudden, the cub dropped the still alive infant. Chaos erupted! Monkeys chattered, the hyena bolted in, the cub lost his nerve, but the calm and elegant mother leopard dropped down, and in one motion retrieved the monkey and climbed to a higher part of the tree. She showed her disdain for her cub’s mistake and the hyenas presence by quickly putting the infant to death. Simple, quick and lethal. With soft bones and young fur, she ate the infant whole. The cub was left a spectator, brooding on his mistake and learning a harsh lesson. The alarm calls of the mother vervet subsided, and she slowly moved off, accepting the harsh reality of life and death.
Jury leader Heinrich van den Berg explains why this image won the Wildlife/Scenic category: This is a once in a lifetime image. The story element of the image is brilliant. The fact that the viewer can only see the paw of the leopard, but the face of the monkey emphasises the unfortunate situation in which the monkey finds itself, and makes the faceless predator seem evil. The image is beautifully framed and executed, but more importantly, it’s got heart. 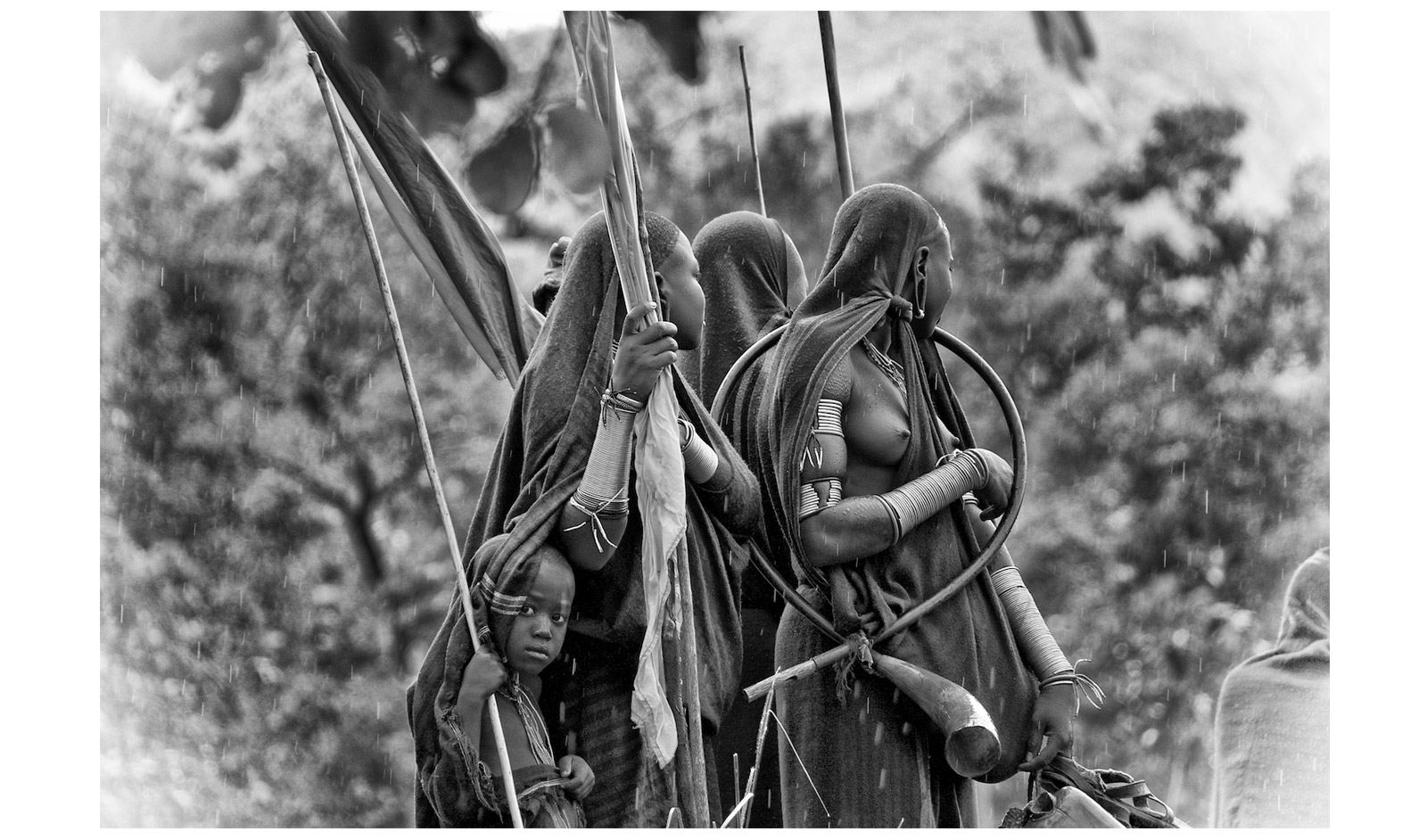 Photographer Trevor Cole describes the scene: I was staying with the Suri tribe in the Western Omo region of Ethiopia. I had an opportunity to watch a ‘donga’ (stick fight), a traditional ritual in which the men of the tribe compete with one another to enhance their status. Victory and the prestige of winning is part of the process of finding a partner – the right to marry. The girls were watching the stick fight, and the little boy spotted me taking the photo – a candid and spontaneous moment.
Jury leader Heinrich van den Berg describes why this image won the People/Culture category: Breaking a pattern is an effective way of creating emphasis. And with this image, of all the women looking away and the child looking towards the camera, this is precisely what happened. The viewer’s attention is drawn towards the child, although everyone in the image is looking at something out of frame. This emphasis is strengthened by the age gap between the subjects in the image. The fact that the child is hiding from the rain while the rest of the subjects are not hiding increases the focus on the child. The photographer has captured the raindrops brilliantly by not using too fast a shutter speed, and by having a dark background so that the raindrops are clearly visible. This image tells a story about vulnerability, protection and potential. 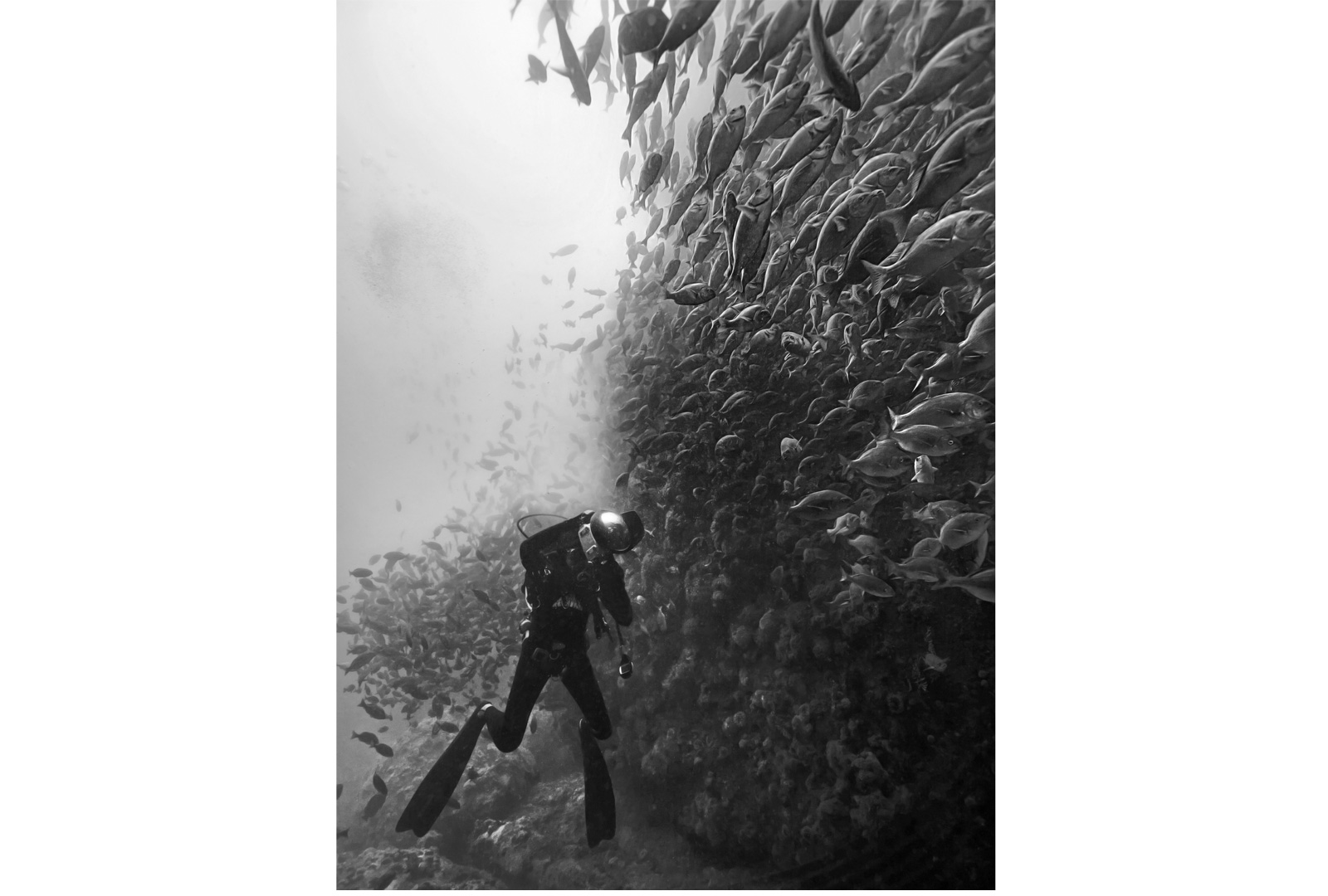 Photographer Aaron Gekoski describes how he captured the image: I was diving the site Pinnacles off Simon’s Town with another photographer when we found ourselves immersed in a school of hottentots. As he hovered, perfectly poised to take the shot, I managed to capture the school ‘exploding’ from his lens.
Jury leader Heinrich van den Berg describes why this image won the Travel category: The subject matter is dramatic and unique, and the balance of the image is perfect with the diver in the corner, his bright lens drawing the viewer into the picture, and the extraordinary sight of the shoal of fish. The diver gives the scene scale and perspective. A black and white image normally works well if it contains various shades of grey, and this image is no exception. The black suit of the diver and the white background provides the image with contrast, while the grey tones of the thousands of fish provides detail and depth. This is a classic black and white image.