In this week’s news wrap South Africa’s Department of Environmental Affairs has issued a quota of seven male leopards for trophy hunting during 2018; a hippo attacked and killed a Taiwanese tourist, and injured another, at a wildlife resort on Lake Naivasha in Kenya; customs officers seized rhino horns worth 1.3 million ($245,000) Turkish Liras at Istanbul’s Atatürk Airport; and a crocodile was successfully relocated from the famous Victoria Falls Bridge.

In a surprise move, South Africa’s Department of Environmental Affairs (DEA) has issued a quota of seven male leopards for trophy hunting during 2018.

The quota allocation is five from Limpopo Province and two from KwaZulu-Natal, and the leopards must be male and older than seven years. The hunting of leopards can only be undertaken in ‘specified hunting zones’, where scientific evidence indicates stable leopard populations.

This after zero quotas were issued for 2016 and 2017, as a result of an alert at the time by the country’s Scientific Authority that the number of leopards in the country was unknown and that trophy hunting posed a high risk to the survival of the species. This latest announcement by DEA was made based on a new determination by the same Scientific Authority that leopard populations in certain areas can now sustain a trophy hunting quota. (Continue to full story here) 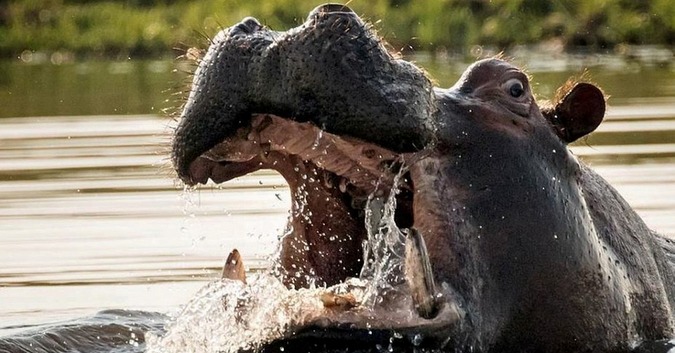 A hippo has attacked and killed a Taiwanese tourist, and injured another, at a wildlife resort on Lake Naivasha in Kenya. The two tourists were taking photos of the hippo on the shores of Lake Naivasha when it attacked. Chang Ming Chuang (66) was bitten in the chest and was pronounced dead upon arrival at Naivasha District Hospital. His colleague, Wu Peng Te (62) survived with minor bruises.

Kenya Wildlife Service (KWS) posted on their Twitter account announcing the death, saying that they are “tracking the hippo”. Originally KWS said the two tourists were from China, but Taiwan’s foreign ministry said the two were from the self-ruled island. Kenya has no formal ties with Taiwan, recognising only China and its claim to speak for and represent the island internationally.

David Kilo, chairman of Lake Naivasha Boat Owners Association, told Kenya’s Star newspaper that the rise in water levels had contributed to the increase in hippo attacks as they are forced to wander into nearby hotels and farms in search of pasture. (Continue to full story here)

Alarmed by the security personnel’s vigilant activities, the suspect left the airport without collecting their luggage. The customs officers examined the unattended luggage in an x-ray machine and found it contained a total of nine rhino horns. It was unclear whether the suspect had planned to sell the horns in Turkey or to transfer them to a third country. (Continue to full story here)

The famous Victoria Falls Bridge, situated between Zimbabwe and Zambia, had an unexpected visitor on Sunday in the form of a 2-metre-long crocodile.

The crocodile was found basking in the sun alongside the railway tracks, with many tourists and drivers stopping to take photos and videos of the unusual sighting. Shearwater Bungee, who offer bungee jumping off the 128-metre-high bridge into the gorge below, captured video footage of the crocodile being captured by local expert Paul Teasdale, which they shared on their Facebook page.

After being removed from the tracks, the crocodile was safely released into the river. (Continue to full story and video here)

The Colours of Salt Read more

The Power of Unity – Cheetah coalition in Maasai Mara Read more
Be inspired & stay informed about Africa. Sign up today!