A Visit from the Kalahari’s Master Trackers

The past three days have been the highlight of my career as we spent them guiding in Sabi Sabi with two ‡Khomani Sa, better known as Bushmen.

Before everyone jumps to the conclusion that I am being politically incorrect, this is the name by which these people told me they choose to be known. The reason for this is that they believe that they are part of the bush; even the name San has been changed to Sa as they feel that they are separate from other [San] groups. The symbol before the name indicates a click that forms part of their language. 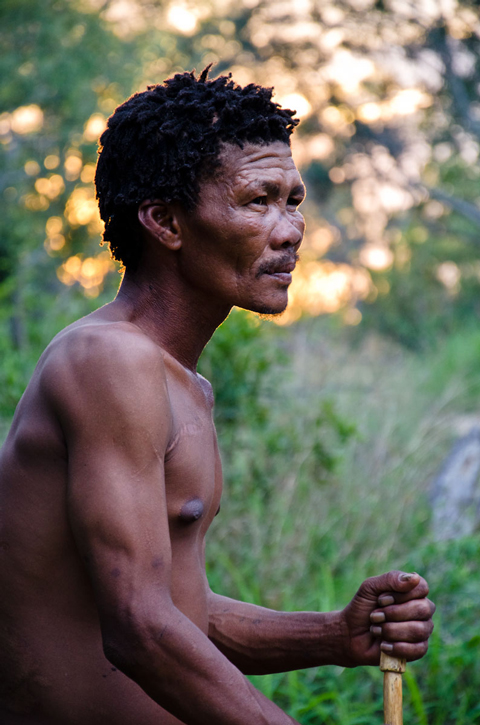 If you have seen the movie The Gods Must Be Crazy, the Bushman actor in the movie is the father of the two men that came to explore our amazing piece of Africa. 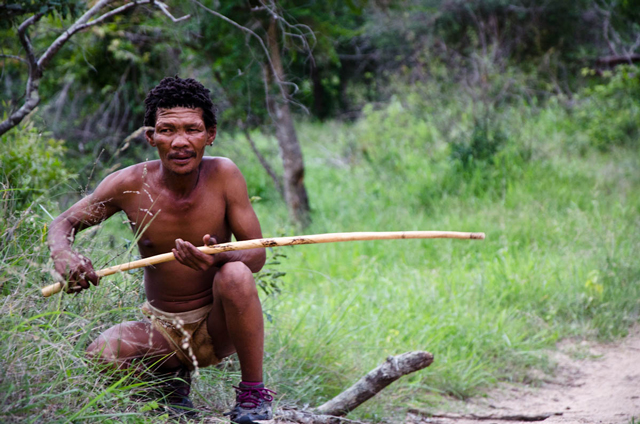 The pair were as observant and inquisitive as children. We watched as they explored the bush, touching, observing and listening to all that was going on around them. The smallest details were treasured the most. They would sit on their haunches and watch closely before talking away in the their language of clicks. They would confer for at least 10 minutes before giving us their insights into what they had observed. When I eventually understood them, I was fascinated to discover how similar their observations were to my scientific knowledge. The only difference was the simplicity with which they had understood all that they had observed. 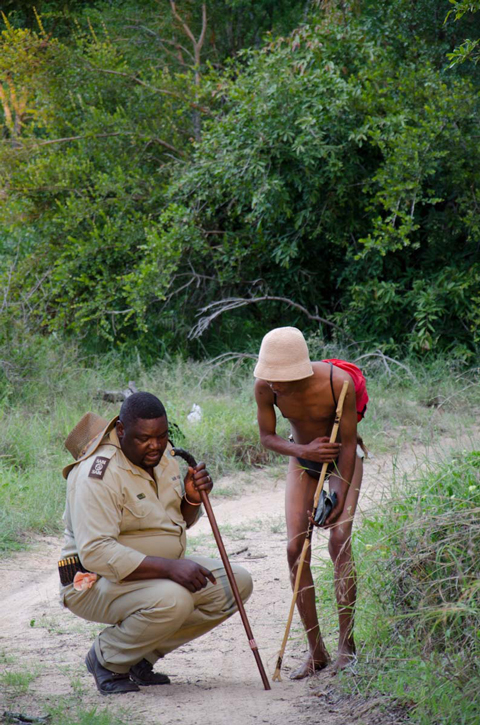 Their connectedness with the environment was so intense that I do not have the words to describe my feelings as I listened to them recounting stories and viewing the lush green bush. These ‡Khomani Sa are from the Kalahari Desert and the vegetation here at Sabi Sabi left them gawking. They looked at the trees that had been pushed over and after mulling over the situation for a bit they explained how the elephants had so much to eat here that they were not worried about wastage. This would never happen in the desert, they told us, as there were so few resources. 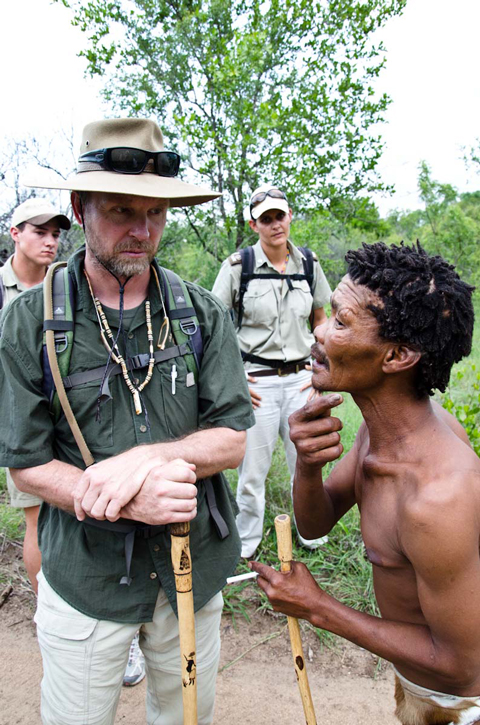 Their stories were not just spoken but acted out, leaving us giggling like schoolchildren. One tale that left me breathless with laughter was about a Bushman boy who was out with his elders learning about the bush. They found an elephant lying down and the boy exclaimed excitedly that the elephant was dead and that they should get its meat. The elders explained that the elephant was merely sleeping. The boy, as boys will, believed he was right and slipped off to get some meat. He climbed into the anus of the elephant to access the soft flesh inside without having to negotiate the thick hide. While filling his collection bag, the space became dark and before the boy knew it all light had disappeared. The elephant had closed her anus. The boy was so confused at how quickly it had got dark but none the less carried on filling the bag with meat.

Finally the elephant stood up and felt discomfort in its tummy and began to push to relieve itself. The boy clutched his collection bag as he felt himself being moved back towards the opening through which he had entered. With a squeeze, the elephant pushed the young man’s head out, leaving him with the realisation that night had not set in and that the elephant was still alive. With another push his shoulders emerged and with the last push the elephant evacuated him onto the ground. She turned to examine what had caused such discomfort. Seeing what appeared to be an elephant calf, she immediately decided that she had given birth. The boy looked up from his foetal position and saw the elephant looking down at him and was convinced he was about to be killed. His immediate reaction was to run for his life and the elephant was left chasing after what she thought was her baby. 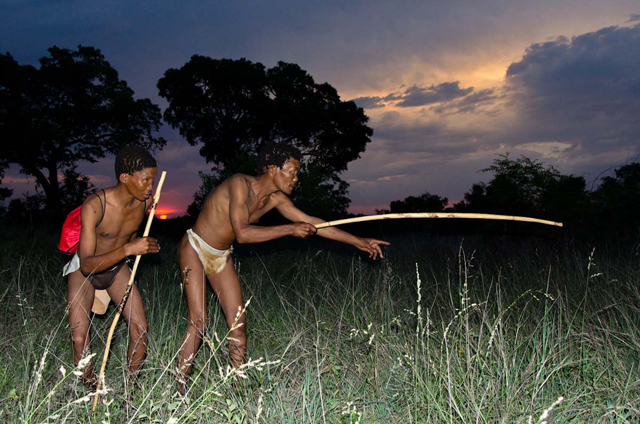 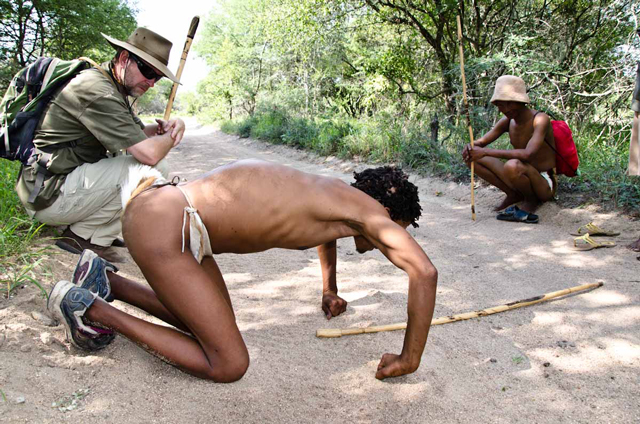 The actions that accompanied the story were too funny to even describe! They recounted many tales during their stay. When we explained the uses of Sabi Sabi’s different plants they explained about the plants that they use for the same purposes in the Kalahari. One day, a massive thunderstorm rolled in and they were so happy just to sit and watch it.

At one stage they challenged us to keep up with them as they walked at the pace they adopt in the Kalahari. Their lithe bodies bounced up and down as they motored across the bush with us almost jogging to keep up. By the time we had completed about a kilometre and returned to the vehicle, we were panting and sweating, our muscles burning. But they hadn’t even broken a sweat. In their home territory, they are able to keep up that pace for three days and in heat that can soar to 50°C. When hunting, they can run their prey to death by not allowing it to stop and rest. 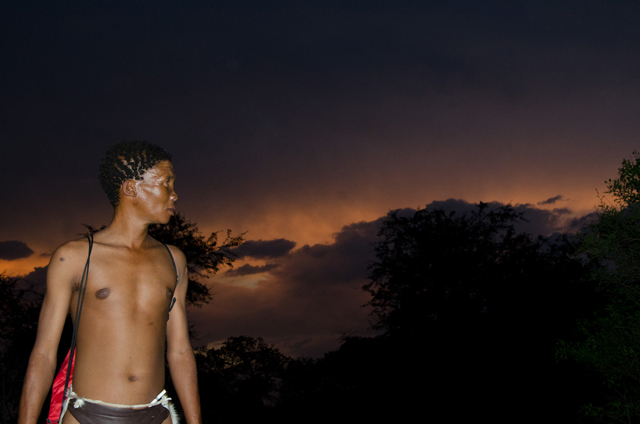 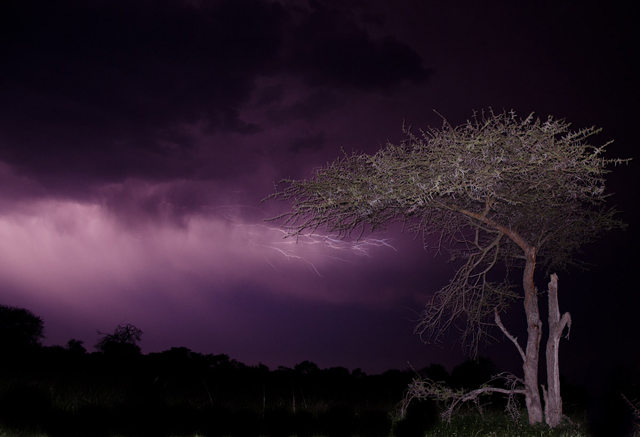 Another highlight was a visit to some ancient rock paintings. There, they squatted on their haunches, examining the artwork and trying to decipher it. In an attempt to figure out what message had been left behind, they chatted together for more than 20 minutes and finally concluded that the drawings were very different to those that they would leave in the desert and that they were not able to interpret them properly. They also did not want to upset their ancestors by making something up. It is this humility that struck a chord with me and left me loving every moment in their company. 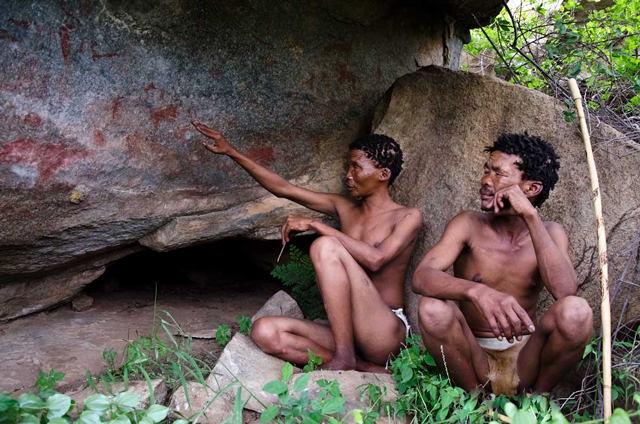 These amazing people and their culture are rapidly disappearing, with only 52 authentic ‡Khomani Sa left and just two able to speak the original language. I feel honoured to have spent this time with them. I have no doubt that their culture will eventually be lost but I hope that what they taught us will be passed on to all that we guide. 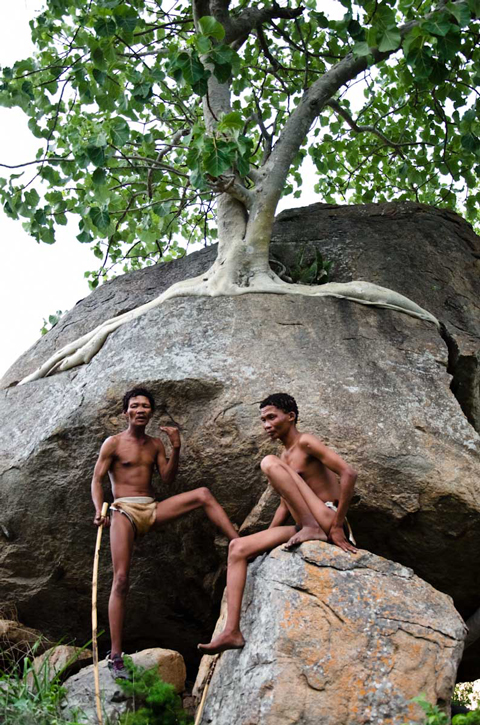