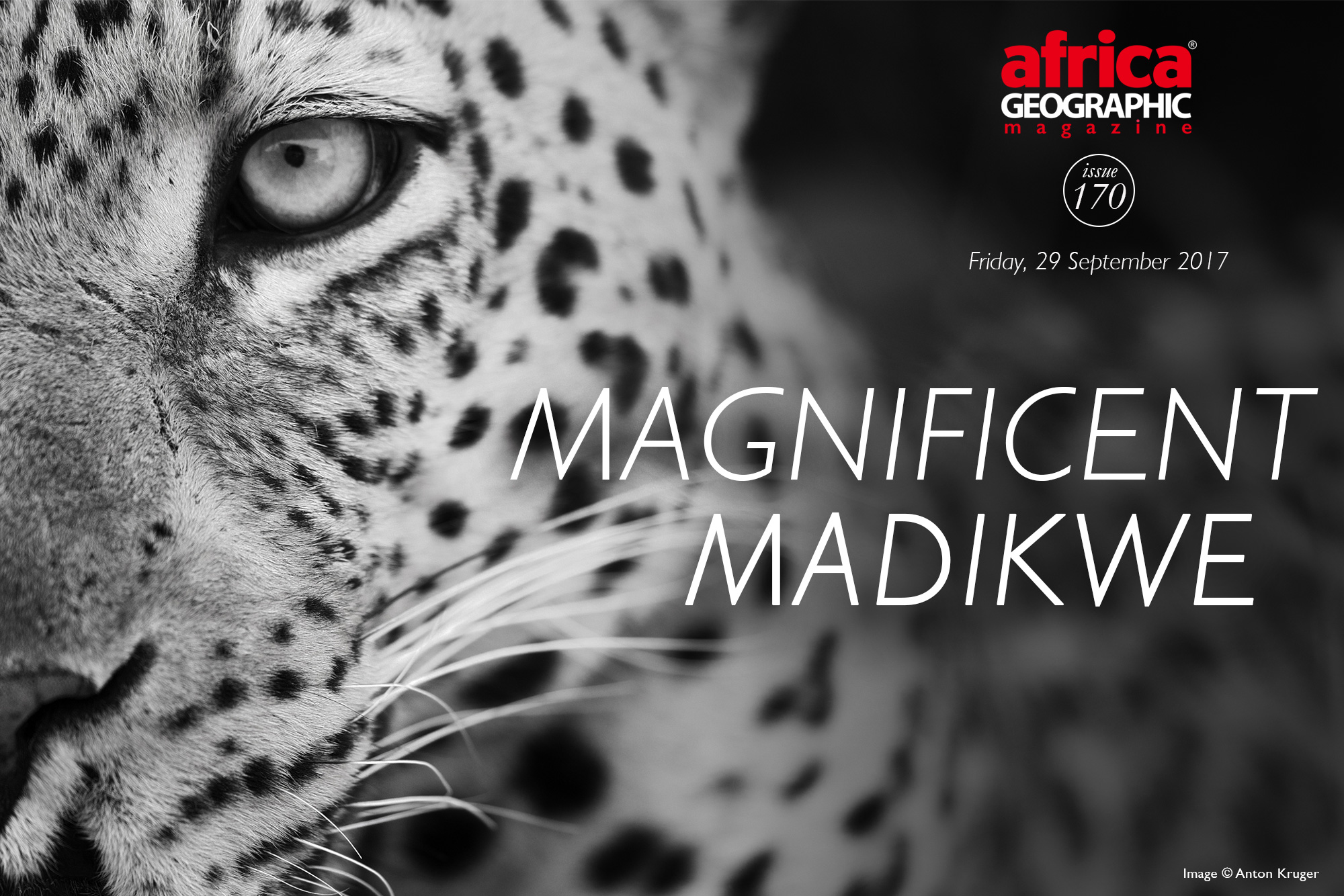 “You either get the point of Africa or you don’t. What draws me back year after year is that it’s like seeing the world with the lid off.” – A.A. Gill

Madikwe Game Reserve is a truly special place. It was established in 1991 on a tract of mismanaged farmland, where the land had been depleted of nearly all of its natural resources. Nearly 10,000 animals were relocated to the area in a project known as Operation Phoenix, over a seven-year period.
At the time, Operation Phoenix was the largest wildlife relocation project of its kind in the world – it was aimed at generating a wildlife-tourism economy of significant benefit to local communities in this remote region of South Africa. It is still a world-renowned conservation project today, and is bearing fruit in a way the visionaries could hardly have thought possible.

My wife and I were fortunate enough to spend two nights at Jaci’s Safari Lodge in Madikwe recently. I have spent a few nights in Madikwe at various lodges over the past 16 years, and was keen to share some of that quintessential Madikwe magic with my wife – it was her first time in the reserve and I wanted it to be as special for her as it has been for me over the years. Little did I know that I would rediscover the magic of Madikwe for myself, entirely!


Usually, man-made structures interfere with my sense of the wilderness around me. They’re a distraction to what I feel should be pure wilderness. But, after a long discussion on the topic with our knowledgeable guide Armand, I started to really feel that Madikwe is one of the rare wild places where I can actually accept a few broken-down structures as part of the wilderness landscape.

It’s a part of Madikwe’s history, and serves not only as a reminder of how things were before, but also that Africa’s wilderness can be brought back from the damage caused by the destructive impact of humanity. For me, Madikwe is a pilot reserve in ‘bringing back wild Africa’ – as the success of Operation Phoenix attests to. It was one of the first reserves in Southern Africa to take the mammoth task of rewilding seriously, and it’s a privilege to be able to enjoy the rewards of those real African conservation efforts today.

After our arrival and delicious lunch at Jaci’s Safari Lodge, we settled into our magnificent Starbed Suite. It’s a huge room with a panoramic view over a tributary of the Marico River, with wildlife constantly moving along the riverine bush down below. After a quick shower (with a choice of three showers!), we got ready for our first afternoon drive.


Before departing, Armand asked us if we would like to see anything specific. I’m sure he was used to some of the more typical answers – Big 5 animals like elephant, lion and rhino, for example. To his bewilderment, I asked him if he could try and get us a rare photo opportunity of a yellow-throated sandgrouse. And, can you believe it, he delivered on our first game drive! As an avid birder, this was a thrilling sighting – what a way to start our safari in Madikwe!

We spotted a few yellow-throated sandgrouses that morning, got some great photos of this notoriously difficult bird and moved on, with smiles on our faces. The next sighting was one of the most rare and special you could wish to have on any safari anywhere in Africa – African wild dogs! And, as if that was not enough, we managed to add two male lions and white rhino to our list for the first afternoon. Game viewing in Madikwe is truly spectacular; it is known as one of the best places in Southern Africa for lion sightings!


After dinner and a sensational day of game viewing on safari in Madikwe, we settled onto the roof of our Starbed Suite and listened to the sounds of the African bush under the stars, full of anticipation for our morning drive.

Our first morning drive was one for the safari books as Madikwe was delivering in hugely unexpected ways! We started off with three old buffalo bulls, followed by a Verraux’s eagle owl on a nest close to camp, and then continued to tick off all the members of the Big 5 within our four-hour drive!
I had my first leopard sighting in Madikwe a few years back, and this time round I got one of my best leopard photos to date (see cover image)! It was a very relaxed male leopard, and he was lazing a few metres from our vehicle. With the excitement overflowing from of our amazing game drive, we returned to camp to enjoy a lovely brunch on the lodge’s deck.


After our delicious brunch we couldn’t wait to go and check out the Terrapin hide – a famous, eye-level hide situated in the middle of the waterhole, accessed only via an underwater tunnel. We spent some time here observing the passing wildlife, with my favourite moment being when a grey heron caught a fish a few metres away from me. He was so close – I got one of my favourite photographs of this graceful bird. 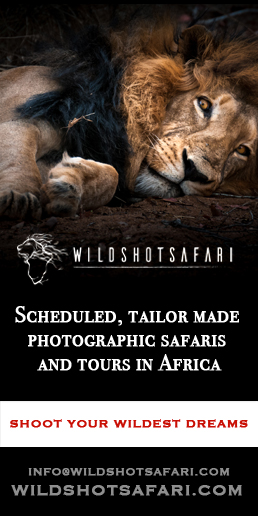 On our afternoon drive we decided to explore the quieter southern parts of the reserve, because we’d already had quality sightings of most species on offer here. We got onto some fresh leopard tracks, but after more than an hour spent tracking, it had managed to evade us, staying true to its secretive nature.
We did see more elephants, white rhinos and two male lions, and it was a relaxed drive for our final afternoon. Upon returning to the lodge, we came across the resident male brown hyena drinking at the waterhole – brown hyena are far more rare and skittish than their more popular laughing cousins, the spotted hyena.

A rhino to remember

I was really hoping for a good sighting of black rhino, but, as I know from experience, it’s not an easy task. Their favourite habitat is in dense acacia thickets, which makes sightings very difficult, and photo opportunities close to impossible.


It was our last morning drive, and we were on a mission. Armand said that there was a thicket where he sometimes bumps into black rhino early in the morning, so we decided to go for it! Maybe, just maybe, we would get lucky. And lo and behold, we got lucky! We found a black rhino mother and her calf!
After spending some time with them (without any real photo opportunities) they became more relaxed, and moved through a clearing where we were able to get some fantastic and memorable photos.

A Madikwe safari is one of the best travel choices you can make when deciding to come on safari in South Africa. You’ll get to explore the full 75,000 hectares of the reserve, and not just a small concession area like in other reserves. The habitat is diverse, with mountains, waterholes, and the Marico River to the east. Game viewing is exceptional, and the area is malaria-free, which makes Madikwe an excellent choice for a family safari.
For my wife and I, Jaci’s Safari Lodge delivered on all aspects, and more. The game viewing was incredible, the food was out of this world, the accommodation better than perfect and the staff made us feel like family! It has since surged to the top our list of African safari destinations – maybe you’d like to add it to your list too?

At 750 km², or 75,000 ha, Madikwe is the fifth largest game reserve in South Africa.
The reserve was formally established in 1991 by the government of Bophutatswana, a former homeland area of South Africa. It was flagged for the potential of a successful wildlife tourism economy that would benefit the local communities – shortly after, Operation Phoenix began. This mammoth ecosystem rewilding operation involved many world firsts, including translocating entire family herds of elephant.
Madikwe lies in a unique location on the fringes of the Kalahari Desert between Botswana and South Africa. Because of the great variety in ecosystems between the Lowveld of South Africa and the Kalahari thornveld of Botswana, the region is host to a staggering variety of species – to be precise, 66 mammal species and more than 300 bird species. 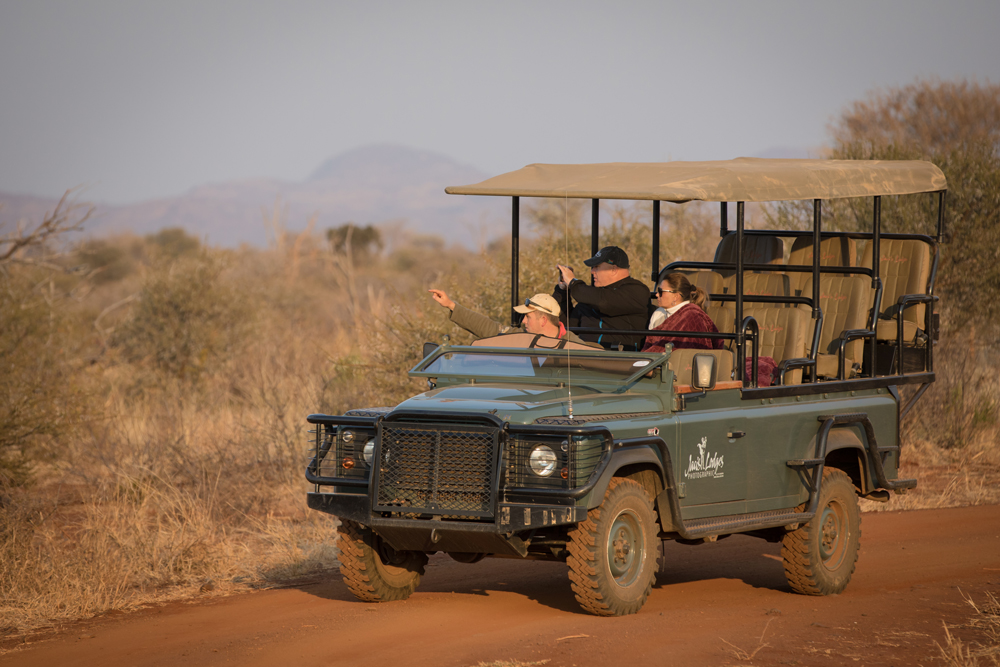 The famous Mafikeng Road – a historical road used by traders, hunters, missionaries and explorers – runs through the reserve. King Mzilikazi of the Matabele tribe ventured through the Madikwe area on this road over a century ago on his way to expanding the Matabele Kingdom.
Madikwe is home to the Big 5, and is also a haven for successful and thriving populations of African wild dog and cheetah.
There is currently a corridor conservation project underway, known as the ‘Heritage Park’ conservation corridor, set to join Madikwe Game Reserve and Pilanesberg National Park. The project is estimated to be finished in two years time.
[wpgmza id=”48″]

Madikwe is easily reached from Johannesburg or Pretoria, on a short three-and-a-half-hour drive, or a 45-minute charter flight. The best time to visit Madikwe is between the months of March and November, when the temperatures are not soaring hot and the game is more active. 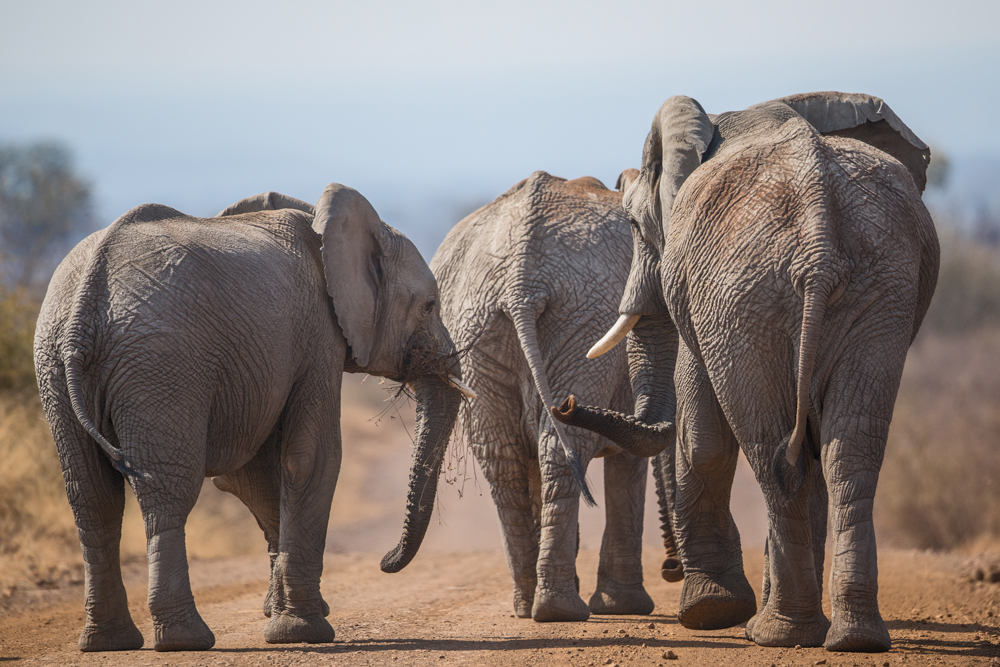 Where to stay in Madikwe

Anton and Renate stayed at Jaci’s Lodges, which offer authentic and boutique 5-star safari accommodation at various lodges in Madikwe. Jaci’s Safari Lodge is the ideal base from which to explore Madikwe, and Jaci’s Tree Lodge provides a unique, wild experience with treehouses that blend into the bush canopy, giving you the opportunity to be fully immersed in the natural wonder of Madikwe.

Travel to Madikwe with Africa Geographic

Travel in Africa is about knowing when and where to go, and with whom. A few weeks too early or late and a few kilometers off course and you could miss the greatest show on Earth. And wouldn’t that be a pity? Read more about Madikwe here, or contact an Africa Geographic safari consultant to plan your dream vacation. 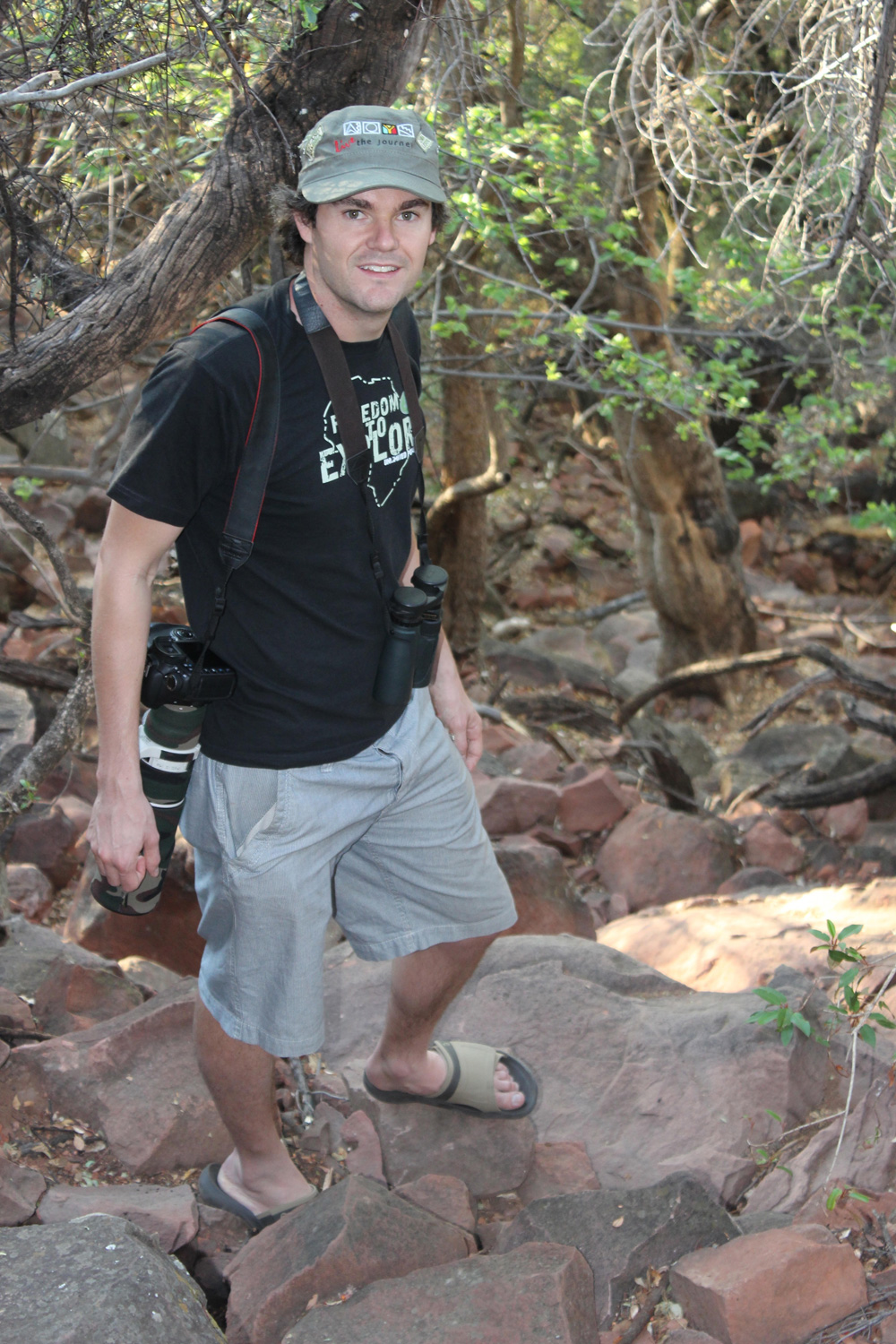 Anton lives in Pretoria, South Africa, and works in his family’s property development and investment business. He and his wife, Renate, both have a passion for wildlife, with a special interest in birds. Leopards also have a special place in their hearts, and Anton initiated, and is currently running, the Limpopo-Lipadi Leopard Identification Project, where they have identified more than 20 leopards already on the Limpopo-Lipadi Private Game and Wilderness Reserve in the Tuli Block of Botswana.