Shivani Bhalla, a fourth-generation Kenyan who founded Ewaso Lions in 2007, has been awarded the 2013 Rabinowitz-Kaplan Prize for the Next Generation in Wild Cat Conservation. 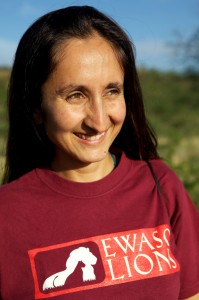 The award has been conferred by Panthera annually since 2007 to a special individual under the age of 40 who has made a significant contribution to conserving wild cats, and who represents the next generation of scientists, conservationists, policy makers, politicians, and planners who will steer the future of wild cat conservation.

Panthera’s mission is to ensure the future of wild cats through scientific leadership and global conservation action. Shivani is honoured to accept this remarkable award. “I’m deeply grateful for this award from Panthera,” said Shivani. “I accept the award on behalf of our amazing team members, who have dedicated their lives to fighting for Kenya’s lions.”

The award, which totals US$15 000, will go directly to Ewaso Lions’ community-based conservation programmes for lions and other large carnivores in northern Kenya.

Bhalla has carried out lion conservation initiatives in the Samburu-Isiolo ecosystem in northern Kenya since 2002. Beginning with research conducted for her Master’s thesis at Scotland’s Edinburgh Napier University, Bhalla produced the first accurate estimate of the lion population in Samburu, and demonstrated that lions move frequently between the region’s national reserves and adjacent areas of human settlement – a recipe for increased human-lion contact and conflict.

Recognising the significant need for mitigation of human-lion conflict plaguing the region, Bhalla founded Ewaso Lions in 2007 – a community-based lion conservation and research organization that now includes a team of 26 local Samburu employees. Today, Ewaso Lions monitors all lion prides in the region (including the Samburu, Buffalo Springs and Shaba national reserves, along with adjacent community lands) and works with stakeholders to implement innovative conservation initiatives that reduce human-lion conflict and raise awareness about the importance of conservation.

Now on track to complete her PhD thesis at Oxford University, entitled “The ecology and conservation of lions within the Samburu-Isiolo ecosystem in northern Kenya,” and collaborating closely with other lion conservationists in Eastern and Southern Africa, Shivani Bhalla exemplifies the expertise, dedication and impact on the future of wild cats that the Rabinowitz-Kaplan Prize was created to honor.