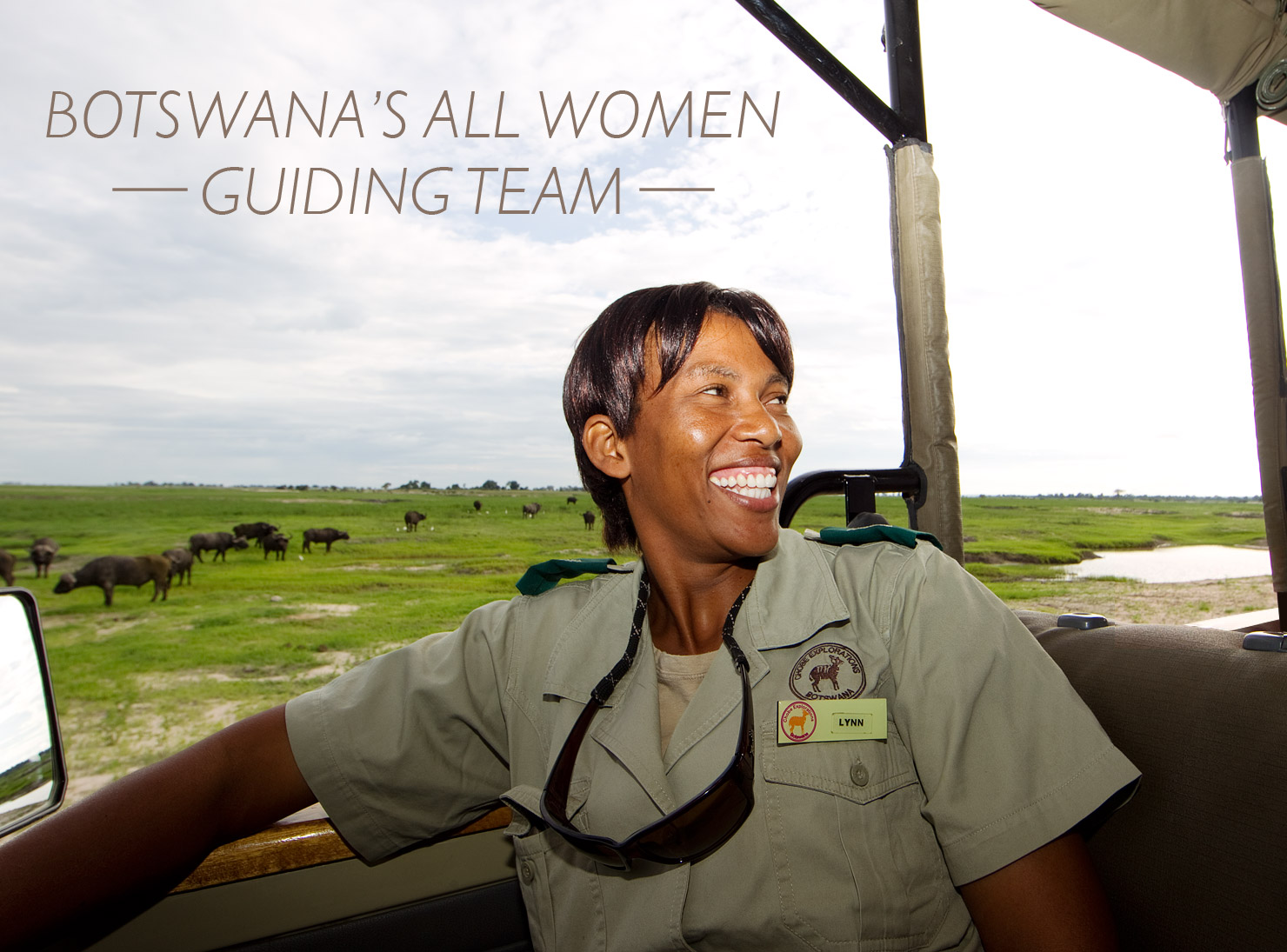 Unusual? Certainly. Ground breaking? Definitely. You see, at Botswana’s Chobe Game Lodge, every field guide is a woman. It’s refreshing really. Congregating in the lounge for their afternoon game drive, guests gather camera equipment and don sun hats before walking to the open game drive vehicles to meet the khaki-clad ladies. Every “Chobe Angel” is wearing a pretty, light-weight scarf to enhance the uniform’s femininity. It’s a nice touch.
I am going out with Malebogo Kgoleng in Freedom 3, the lodge’s, and indeed the country’s, first electronic game viewing vehicle, another ground-breaking initiative. Climbing into my seat, Malebogo introduces herself as Lebo and, asking if I am ready to go, turns the key to fire up the vehicle. Except, there is no sound. What a coup this must be for safari goers wanting to sneak up on skittish animals.

Leaving the lodge’s manicured gardens, we cross the game grid and drift into the bush. Lebo and the electric vehicle draw more attention from guests in other safari vehicles than the wildlife does. Male guides do a double take when they read the “Battery Power Only” sign on the vehicle. Some start to laugh, not believing what they read, then facial expressions turn to incredulity as Lebo drives off silently, reassuring them that there is no gear box or gasoline. The guests seem as curious about a woman guide as they are about the vehicle.
I too am curious to know how Lebo got into the business of guiding. She tells me she was born in the village of Ramotswa, far to the south east of Botswana. ‘Where I grew up people don’t know much about wildlife,’ she tells me. ‘Many found my career choice quite astounding. And they were afraid I might be harmed by wild animals.’
After graduating from the Botswana Wildlife Training Institute [BWTI] in Maun, Lebo joined Chobe Game Lodge as a guide in June 2006. At the time there were only three other women, the rest of the lodge’s guides were men. She says some guests react negatively when they realise they will be guided by a woman, until they are proven wrong. ‘I don’t blame them, because for years guiding was an entirely male dominated industry,’ says Lebo.

Fitting into a male dominated industry is no doubt hard, but as established South African guide Nicky Silberbauer points out in a subsequent interview: ‘The way a lady works within the team is honestly down to the perception of the team.’
During her second stage of training at a private game lodge, Nicky was the only female in an all male guiding team and she found it incredibly hard to impress anyone. ‘It became clear that the lodge didn’t have any plans for me as part of their full time guiding team,’ she explains, ‘so they offered me a position as relief camp manager/guide at one of their small camps. Bitterly disappointed, I moved to my new home. My room wasn’t much bigger than a cupboard, positioned between two of the most wonderful Zulu men I know. Together the three of us worked really hard to learn about our surroundings. I was given some freedom to allow myself to grow. I took game drives for the directors and the staff’s friends and family, each drive learning more and more. One particular director kept returning with his family which gave me great confidence. It was he and my head ranger who suggested I try to sign up at another lodge for the next training course. I was accepted after my interview drive. The team there was completely different. I was the fourth girl to be joining a team of thirteen.’

Women make effective guides as they are better communicators

I continue the conversation with Lebo after breakfast on the water. We are aboard Freedom 4, Botswana’s first electronically powered river skimmer. Chobe Game Lodge director Johan Bruwer steers the skimmer upstream and Lebo moors close to the bank where hundreds of white-backed vultures are feasting on a day-old buffalo carcass. While we take in this scene I ask Johan about the Chobe Angels. He smiles. ‘Back in 2004, when I started working for Chobe Game Lodge, all of the guides were men, apart from one lady called Milly,’ he says. ‘Make no mistake, the guys were excellent at what they were doing, but being a woman, Milly drew far more attention and comments from our guests. Back then there were barely half a dozen female guides in the whole of Botswana, so their interest was not surprising.
One of the problems women had breaking into this profession was that most people assumed that only a man, equipped with a healthy dose of testosterone, was able to deal with the unpredictability and potential threat that a wild animal poses,’ he grins. ‘But I soon realised that, in many ways, women had potential to be more effective at guiding because they tend to be better communicators, they look after their equipment better, absorb information quicker and relay the things they learn to guests more efficiently.’ Shrugging, Johan adds: ‘And maybe female guides feel they have more to prove.’

Wanting to get more women interested in guiding, the lodge started advertising in newspapers. They also approached the Department of Wildlife and National Parks training institute in Maun (DWNP). The Department told them they received interest in their courses from potential female students, but that they had difficulty placing them with safari operators after graduation. They said people in the business thought women wouldn’t cope living in a bush environment or with long periods of time away from husbands and families.
‘Our response to the DWNP was that we were committed to taking all the female students the institute trained from then on, providing them with active on-site training to get to know the particulars of the area,’ John explains.
The male guides moved on to other lodges or operators over time, as is the norm with most guides, enabling Chobe Game Lodge to fill vacancies with woman guides. ‘Today, Botswana has a thriving female guiding community,’ says John. ‘There are over 50 women in guiding positions throughout the country and we have the unique privilege of being home to the only all-female guiding team of no less than 16 Chobe Angels.’

We need people, irrespective of gender, who are passionate about wilderness

Well-known safari guide Michael Lorentz supports efforts like those of Chobe Game Lodge. ‘There is currently a gender barrier in our industry and a strong bias in hiring and training towards men, so fewer women are looking to make guiding their career. This needs to change and lodge operators need to put a lot more effort into recruiting and training woman into the profession,’ he says. ‘But I think you need to be careful of any gender bias. The truth is we need people, irrespective of their gender, who are passionate about wilderness, understand conservation issues and who are driven to share this knowledge and passion with others. The qualities you look for in a great guide should not be gender dependant.’
Returning to the jetty a few hours later, I thank Johan for the chat and head back to my room to freshen up and change for dinner. The soft glow of candlelight from the Linyanti Bar welcomes me and I chat with some of the other guests. Most of them are supportive of the women guides and all have had great experiences that day.
One regular woman safari goer says: ‘The question for me is more whether I feel my guide is confident that she can handle any situation that may arise. That goes both for encountering wild animals as for having to fix car problems or changing flat tires.’
A seasoned male bush traveller informs me: ‘If she is fully qualified in all aspects, then gender is not an issue at all. The only thing I might do,’ he adds, ‘is offer to help if our vehicle were to get stuck in the bush with lions in the vicinity and she needed assistance. But then that would also apply to a man.’

The following morning I join a newly-wed couple from Cape Town for a game drive. At the wheel is Dikeledi Robson, or DK for short. Expertly handling the regular diesel-powered Land Cruiser through the thick Kalahari sand, she names individual trees and bushes and elaborates on their significance to the environment. As we drive along, I learn that DK has been waiting to fulfil her present position as a guide for a long time.
‘I started working at Chobe Game Lodge in mid-2012,’ she says, pulling the wide brim of her hat further over her face to block out the sunlight. ‘I was 25 and had only just passed my driver’s license test before moving to Chobe, and I couldn’t wait to become a fully-fledged safari guide. But there was a problem.’ She turns to give us a little grin. ‘In Botswana, in order to qualify for a public transport license, which you need to drive guests around, you need not only be a minimum of 25 years old, but you have to be in possession of a valid driver’s license for at least 2 years. So I couldn’t operate a game viewing vehicle.’

The lodge employed her anyway and she spent those 2 years guiding guests on the skimmer boats and going out with other guides to acquaint herself with Chobe’s diverse routes and incredible flora and fauna. She is clearly relieved that the waiting game is over. ‘I love my job,’ she beams. ‘There is always something interesting going on and I learn something new every day.’
Heading back to the lodge a few hours later I climb out of the vehicle and turn to watch the ‘Angels’ natter before getting back into their vehicles to park them in the shade. They’re a great bunch and obviously share a wonderful friendship. No wonder Chobe Game Lodge is proud of their unique guiding team.