Written by: Kelly Landen on behalf of Elephants Without Borders

A young bull elephant was sighted with a wire snare wrapped around his front leg. After an initial assessment, a decision had been made that he would have to be put down. However, considering it was late in the evening and dark, the bull was spared another day. One of the onlookers decided to contact Elephants Without Borders (EWB) to see if there was anything they could do to possibly help the situation…

Although rescue and rehabilitation is not the conservation research organization’s forte, they already planned to have their wildlife vet, Dr. Larry Patterson from the Kalahari Game Services, on hand for field activities that week. EWB Program Manager, Kelly Landen, made a few phone calls to ensure that if the young bull was sighted again, they would be notified. That very same day, as the team was in Chobe National Park, they received the call that the young bull was sighted at Senyanti Campsite’s artificial waterhole. They knew they could not reach the calf within the hour so EWB researcher, Tempe Adams, was called to the scene to keep tabs on the unfortunate bull until the team could get there. Luckily, the bull did not move off and was found drinking near the pan and cooling his horrific injury.

The bull was quickly darted and in 10 minutes the immobilization drug took effect and he went down.

The team jumped in to attend to his leg. The snare was not a simple wire, but a thick wire cable and had obviously not been set to capture big game, like an elephant. A bolt-cutter had to be used to cut if off. The injury was deep, however luckily not all the way to the bone, and infection had not set in. The wound was cleaned and the bull was given an injection of strong antibiotics before he was moved into position for him to get up. 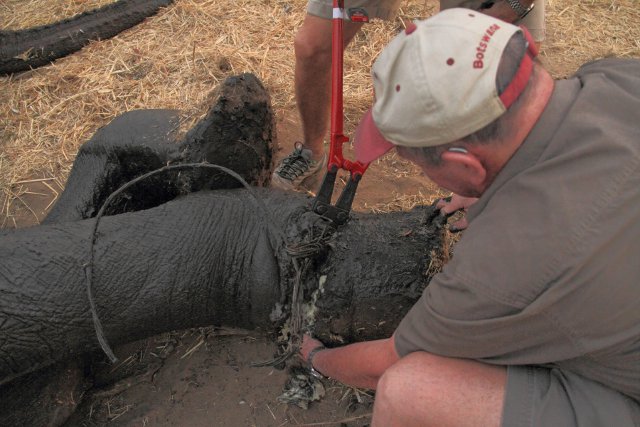 A crowd of eager campers only had to wait a few minutes to watch as the bull easily stood up. The crowd cheered as he slowly moved off. An elephant saved from poacher snare is free to live another day – and hopefully for many more years to come!

The management team at the campsite has been keeping a watchful eye out for the young bull and he has been regularly sighted returning to the pan. In one week, the swelling in his leg has gone down and his wound appears to be slowly healing. Although it is surely quite painful, this one young bull has been given a second chance.

EWB would like to thank the management team at Senyanti Campsites (and Iris for the update photos), Mike Holding, Ian McMillan, Clive Millar for the original call, and the campers who eagerly rushed in to grab buckets of fresh water to help clean the wound.

Elephants Without Borders (EWB) is a charity organisation dedicated to conserving wildlife and natural resources through innovative research, education, and information sharing with all people. They encourage mankind to live in harmony with wildlife and the natural world. Considering wildlife don’t use passports, the notion of elephants and ‘conservation without borders’ is crucial for preserving biodiversity and a healthy landscape. Using African elephants as an inspiration, EWB strives to identify wildlife migratory corridors, secure wild habitats and elevate conservation of all wildlife. The largest mammal that walks the earth is now leading the way to help save vast areas of wildlands and the biodiversity they support.