I am aware of the fact that many species of cuckoo are brood parasites – laying their eggs in the nests of other species – but to witness this firsthand in our garden, was an incredible experience!

We have a couple of Southern-masked weavers breeding in our garden in various nesting sites. One morning, after monitoring a particular nest for days in anxious anticipation for some sign of movement, I heard a few loud chirps in a yellow trumpetbush in the vicinity of the nest. Upon taking a closer look, I found myself staring in disbelief at a Diederiks cuckoo chick amongst the foliage! 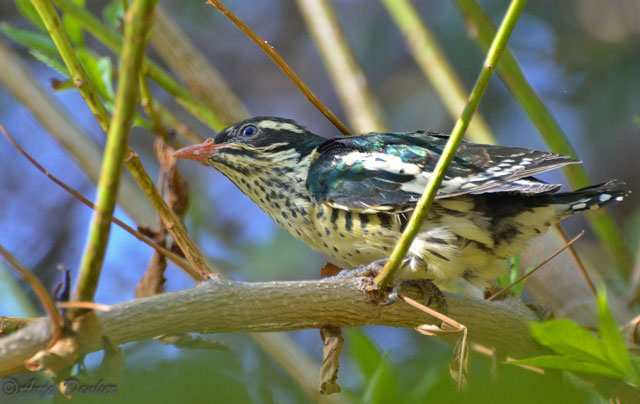 Not far away hovered an anxious Southern-masked weaver female with a tasty morsel in her mouth. This was certainly a first for our garden!

During the next couple of days I tracked the strange relationship between the Southern-masked weaver hosts and the cuckoo chick; the host parents arriving regularly at top speed with an array of tasty little insect tidbits ranging from spiders to dragonflies to worms. In the course of the next 3 weeks, the little Diederik cuckoo grew at an alarming rate, soon outgrowing the increasingly frazzled looking southern-masked weaver host. I observed the male doing most of the feeding and starting to lose his breeding plumage in the process. 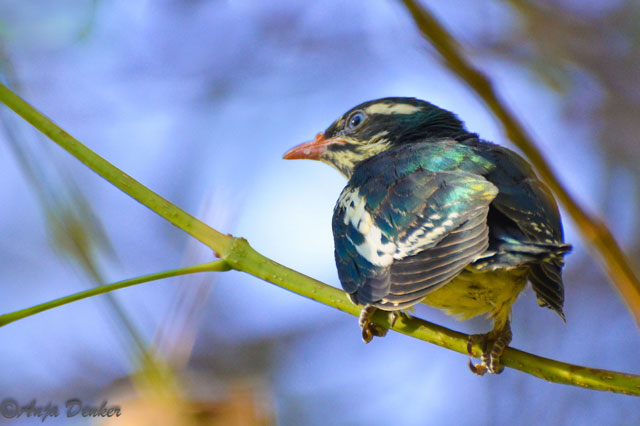 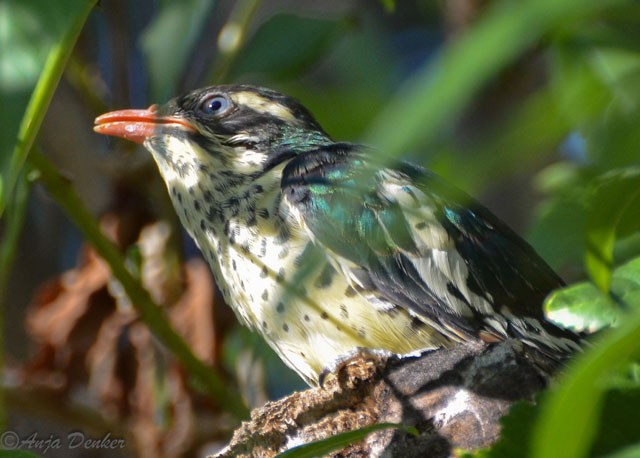 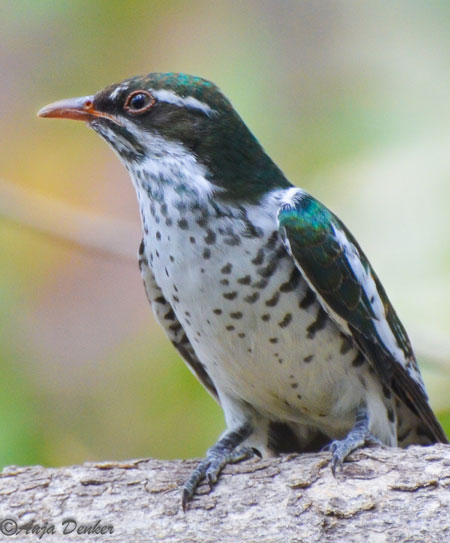 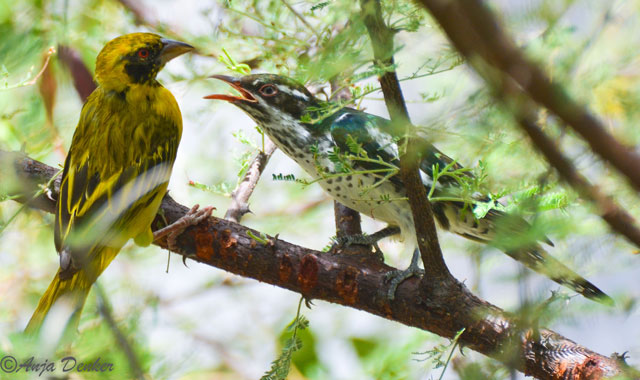 The cuckoo started growing increasingly demanding in wanting to be fed, often pecking at the harried weaver and calling raucously – almost like a parasite! The weaver often resorted to seeds instead of insects and seemed quite exhausted at times. 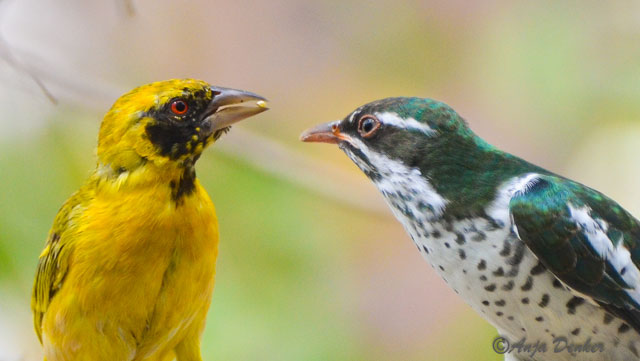 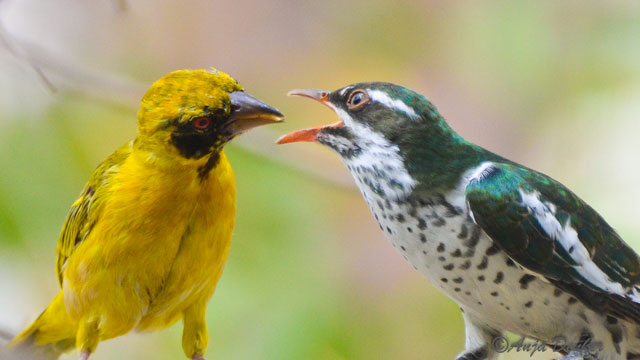 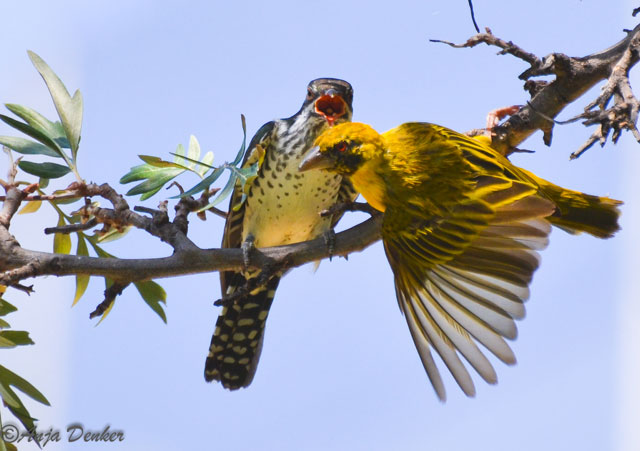 This whole process lasted for about 2 1/2 weeks until I photographed the Diederik cuckoo chick finally leaving the nest. 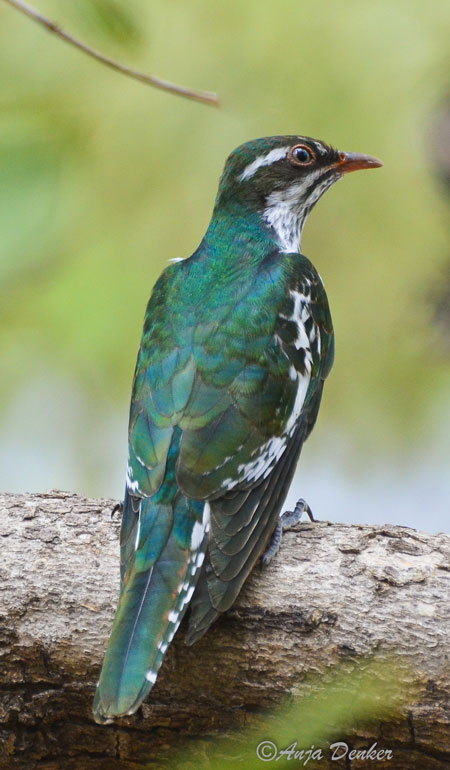 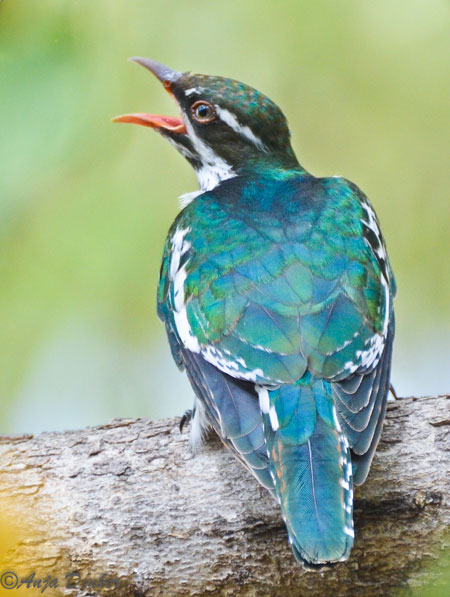 I am a Namibian by birth and live in Windhoek, my profession being a visual artist specialising in postage stamp design. I have always had an inherent love for wildlife and nature – especially lions and birds, and developed a passion for photography a few years ago. I am a keen observer and try to capture special and unexpected moments wherever I am. Conservation is close to my heart and I tried to raise awareness through postage stamp designs and by supporting the Desert Lion Conservation project. I am rarely parted with my camera and am fortunate to have a large garden with an abundant birdlife. My happiest moments are those that are spent outdoors, travelling around Namibia and other places, with my family and camera close by.