Co-existence between cheetah and farmers

Cheetah Conservation Botswana (CCB), situated among farmlands in the Ghanzi area, has been studying and working to assure a secure future for the nation’s cheetah. 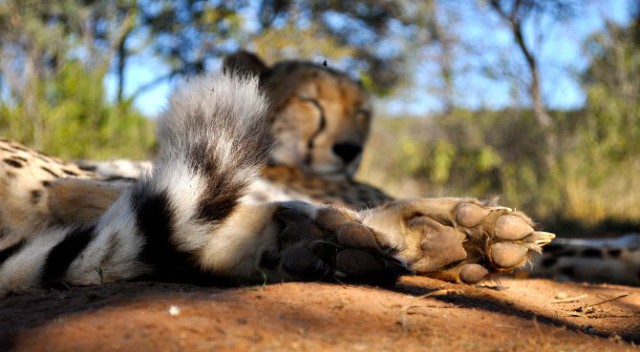 The population of wild cheetah has dropped by a staggering 90% over the last century alone. These fast but smaller predators often do not do well in protected areas like national parks, where they compete with larger predators such as lions, leopards and hyenas. Often driven out of such areas and onto nearby marginal lands or farmlands, cheetah may then face more threats from livestock farmers and poachers.

Over the last few years conflicts between farmers and predators, such as the cheetah, seem to be decreasing in Botswana thanks to efforts of organisations like Cheetah Conservation Botswana. However the animals’ habitat continues to shrink due to human activity and more solutions are needed. “Today, only 10 to 12 000 of the 100 000 cheetah which were estimated to roam throughout Africa remain and now live in isolated populations scattered throughout the continent”, says Rick McKenna, CCB’s Ghanzi camp and Research coordinator.

“Approximately 3 000 of those reside in Namibia and 2 000 in Botswana. So what happens in Botswana is extraordinarily important for the future of these cats”, he adds. The rest are scattered throughout Southern and Eastern Africa, mostly in Kenya, Tanzania and Ethiopia, and a few can be found in in the northern parts of the continent. Although 100 years ago, their range continued into the Arabian peninsula and as far as India, today, the only place outside Africa where wild cheetahs are documented is in Iran, where fewer than 100 individuals are thought to remain.

Cheetah Conservation Botswana has been trying to combat conflict issues between predators and the community by combining community outreach supported with education and research. CCB thus helps assist farmers identify which predators are causing problems on their farms by implementing predator-friendly and cost-effective management tools to help protect livestock from predation. In fact, some farmers believe that every cheetah or other predator is a livestock killer. But research has found that most problem animals are physically restricted in some ways (crippled or injured) or are old and can’t hunt properly. Sometimes the calves are left alone or injured livestock remain behind the herd, which can also attract the attention of predators.

“So we try to teach farmers to keep those kinds of animals safe, by kraaling it at night, for example, and we try to promote better herd health”, Jane Horgan, one of CCB’s research officers, says. “The use of the dogs is also incredibly efficient. A recent survey we conducted with CCB found that 84% of farmers using dogs had a reduction in the amount of livestock they were loosing to predators. Farmers that were loosing 20 to 40 livestock a year to predators are now loosing none or maybe one or two. The average saving for farmers was about US$2 000 a year”.

While guard dogs are quite popular with small stock farmers, their ability to guard cattle is not widely known or tested in Botswana. “So we’re currently trying to test the dogs with cattle at the moment to try and see how we can move forward with that because, obviously, cattle farming is a very big industry”, she adds.

Another part of Cheetah Conservation Botswana’s work includes educating the public about the vital role that predators play in the eco-system by conducting numerous school talks and activities and running bush camps. “As for children, they are the future and if you can capture them at a young age and interest them in topics such as conservation and make them understand how predators fit in the bigger picture, it’s something that may stick with them as they grow older”, Rick enthuses.

CCB is also involved in extensive research such as diet analysis and behavioral studies of the cheetahs. “We found that only about 5% of the cheetah diets can be attributed to livestock species. Generally speaking, cheetah and other predators prefer wild prey so when a predator is taking livestock it’s an opportunistic situation or there are some underlying problems driving the cheetah to livestock”, says the Research Coordinator. By using various technologies such as GPS and radio collars, CCB researchers have been able to accumulate a lot of data, but they are constantly trying to get a more complete picture of the cheetahs’ population. To better record the animals’ activities, CCB works regularly with local San trackers. They have incredible skills in deciphering the natural world through the tracks and signs left on the landscape by its wild inhabitants. 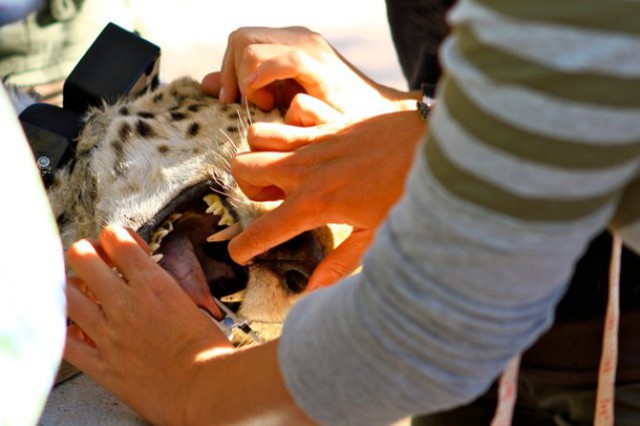 In April this year, they will be following on with a larger project in order to look at the behavior of cheetahs on farmlands. Researchers will trap and fit about 10 cheetahs with cameras, alongside the usual GPS and radio tracking devices. A lot of research has been conducted in protected game reserves, but cheetah behavior in the farmland areas, which are really “the strongholds of the cheetahs these days”, as Jane Horgan puts it, has not truly been studied in great detail. “No one really knows what’s going on. Often farmlands are quite bush-encroached, in a bushy environment you can’t see 20 to 30 meters ahead of you, so the National Geographic crittercam project is a great way to be able to find out what social groups there are, how cheetahs interact with each other, how they’re hunting and moving through the environment. We are guessing that they’ve adapted their behaviors in many ways because of the bushy environment and the lack of larger competitors. But we really don’t know. This project is a great way to open our eyes to what’s happening”.

The survival of the fastest land mammal in the world relies on the conservation of the few remaining populations found in Africa, CCB stresses. Many threats continue to contribute to a decline in numbers so promoting the coexistence between the livestock farmers and the cheetahs is really the key to their survival in the future. “Only by understanding cheetah ecology can we really hope to develop scientifically supportable strategies to help improve cheetah conservation,” Rick concludes.

As a journalist I believe in the power of words. When I set out for Africa, it was with a specific purpose: to travel the world visiting various wildlife sanctuaries, and write about them in order to tell everyone of the great work they are doing to help preserve different species of animals. I adore being surrounded by the people who are working to help wild animals survive and thrive. I am also the founder of Wildlife Sanctuaries Worldwide, a not-for-profit organization which aims to enable writers who are deeply passionate about wildlife to use their skills in a new and innovative way in order to help raise awareness about good and ethical wildlife sanctuaries around the world.