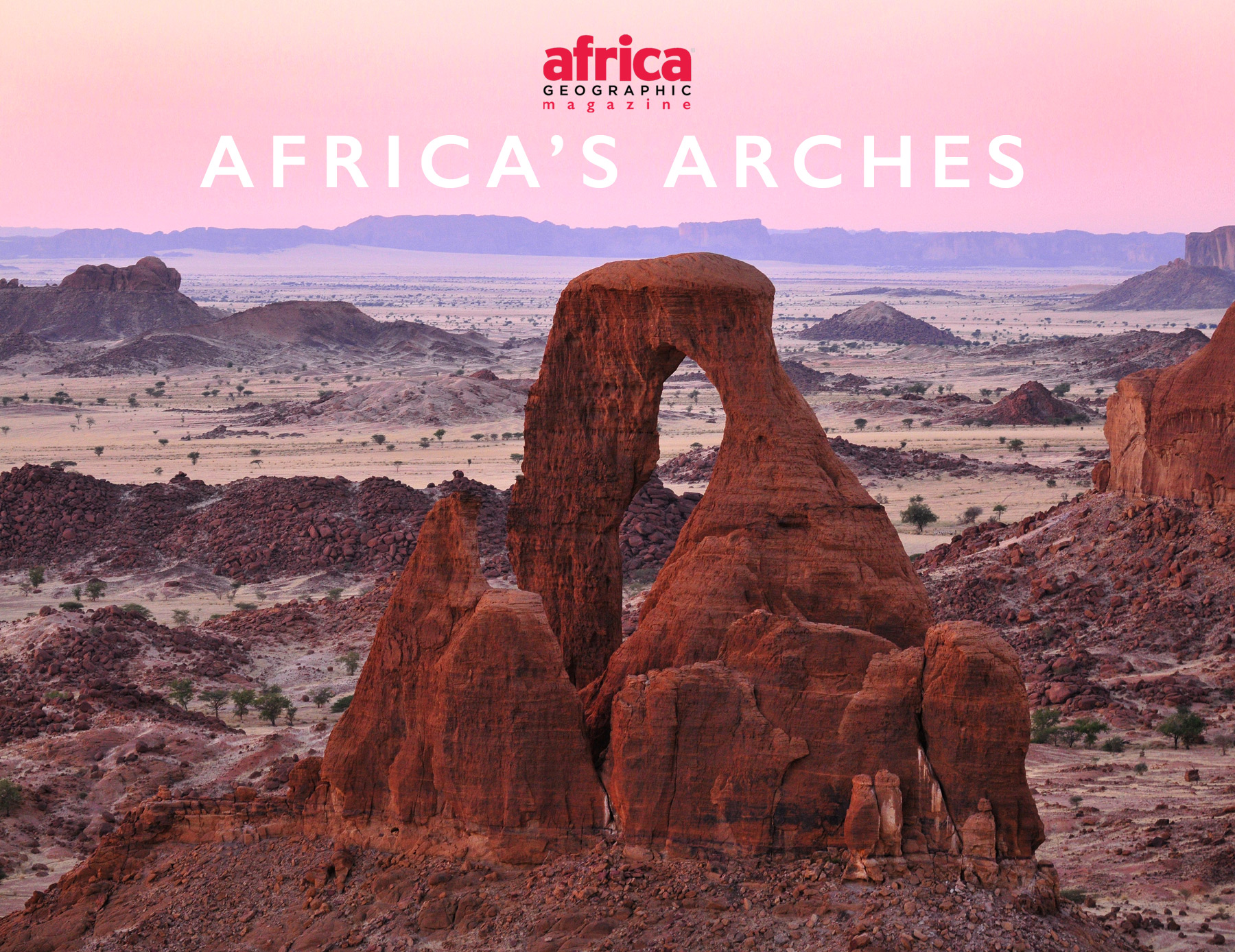 RUNNING THROUGH THE SAHARA'S ARCHWAYS TO HONOUR SLAIN WILDLIFE RANGERS

In February 2015, five rangers from Chad’s Zakouma National Park and the operations manager of DRC’s Garamba National Park will travel to the Ennedi Plateau to run the gruelling Le Treg ultramarathon. Their number is significant as they run in memory of six Zakouma rangers killed by poachers in 2012. Jean Labuschange, previously a volunteer in Zakouma and now Garamba’s operations manager, is one of the runners.
‘We want to show our support for the ‘boots on the ground’, as well as commemorate the rangers that have given their lives conserving the wild places of Africa,’ she says. ‘Rangers collectively walk thousands of kilometres every day on patrol. We would like to run 90km for them.’

They will be joined by nine other African Parks members from various parks and offices across the continent. Their aim is to show their commitment to the Chadian Government in establishing Ennedi Plateau as a national park, and to raise awareness and funds for anti-poaching initiatives at all the parks managed by the organisation.
Le Treg was first held in 2014 and the location was chosen by organiser Jean-Phillipe Allaire who was stunned by the beauty of the Ennedi Plateau and driven by a desire to open up a region very few foreigners have ever visited. Le Treg comprises three distances of 45km, 90km and 180km coursing through the Ennedi Plateau – I say through because wind and water erosion has carved much of the plateau into a labyrinth of deep channels and rock towers that will leave you breathless before running a single step.

The Ennedi Plateau is Africa’s answer to America’s Arches National Park, but on a much larger scale. The rocky massif contains hundreds of arches and covers an area of about 40,000km2 which would dwarf Arches, Zion, Bryce Canyon, Canyon Lands and Grand Canyon National Parks put together. But as spectacular as Ennedi’s towering rock formations are it enjoys nothing of the American park’s popularity due to it’s inaccessibility and extreme desert climate. Yet even in this hyperarid region, water can be found in the Lakes of Ounianga to the north west, a UNESCO World Heritage Site comprising eighteen interconnected saline and fresh water lakes fed by ground water – the ultimate oasis.
The basin in which the lakes can be found was once occupied by a much larger lake, but abrupt climate change between 5,000 and 10,000 years ago meant this fertile area was turned to desert. Ancient rock art on the Ennedi walls depicts animals characteristic of a savannah environment, as well as large herds of oxen and camels. Natural waterholes can still be found amid the labyrinth of rock formations where desert nomads stop along their route to water their camels.

Catfish were catching birds and eating them whole

While the northern rocks are surrounded by sand, the southern rocks rise from swathes of poor grassland and acacias. Travelling further south through the immense country of Chad one enters the semiarid Sahel, then the land gives way to more temperate climate until one reaches Zakouma National Park. In contrast to the north of the country, Zakouma enjoys a wet season that floods much of the park from June to October. But come the dry season and the water-ways rapidly evaporate.
Jean recalls one evening spent beside one of Zakouma’s last remaining pools along the Tinga River: ‘As water becomes scarcer, animals and birds gather en-masse around any remaining pools, often disregarding their would be dislike for each other. On this particular evening we had hundreds of thousands of Quealea coming down to drink; an old baboon drank from the water and he and the catfish were all wildly trying to catch the birds, often succeeding and eating them whole. A herd of buffalo wandered across to drink in the fading light while two lionesses lay on the opposite bank. This was all happening meters from me and I remember thinking the nearest mini bus full of tourists must be at least 1,500 km’s away.’

Read more below the advert

Part of Jean’s current role in Garamaba National Park is deploying rangers on patrol. The park is in a volatile region of the Democratic Republic of Congo and she has a special affinity for the pressure that rangers are under: ‘Rangers all over Africa are the ones on the frontline in this conservation war, often facing incredible obstacles in their day-to-day work. When a typical central African rainstorm hits, and we are safely in our houses or offices, or the temperatures are nearly 50°C outside, one needs to stop and think about the guys on patrol who are feeling it first hand.’
Then of course there is the danger: ‘In 1998 a veteran ranger named Mahamat Abubakar was shot and killed by poachers while on patrol in Zakouma,’ Jean says. ‘His son, Zachariah, followed in his footsteps and chose the life of a ranger – two years later he was killed in a poachers’ ambush. Zachariah’s younger brother, Hissein, after having lost both his father and his brother to poachers, wanted to follow the same conservation path in honour of his family, but as the park welder and not a ranger. I got to know him very well during my year in Zakouma – he was truly one of the best people I have ever had the privilege of meeting. Hissein was tragically killed in a freak accident in the park a year ago – unrelated to poaching.’

In Zakouma horse patrols are deployed in the wet season but during the dry season many rangers patrol on foot. They walk between 15 and 25 kilometres per day and have a 10 day on, 5 day off rotation. ‘During their 5 days off in between patrols, the team entering Le Treg concentrate on doing longer runs, no easy task after 10 days of hard walking,’ explains Jean. She has been a runner ever since cross-country events at school in Kenya, running for personal enjoyment and fitness. But this will be Jean’s first ultra marathon, a daunting prospect considering the harsh environment of Ennedi.

‘In the wet season, doing long runs in the park is challenging due to the very tall grass so I have been training in and around the Head Quarters in Garamba, as well as on our airstrip. There is a lot of repetition involved when training for a 90km on a 3km circuit, so I try and mix it up a bit by changing direction and having new music on the playlist.’
The only thing that worries Jean about running Ennedi is the sand. ‘Many areas in the Sahara are currently undergoing conflict, yet northern Chad remains one of the more secure areas where people can experience the true desert. It’s one of my favourite countries, ranging from incredible landscape and wildlife experiences to fascinating nomadic people who move with their camels, oxen and donkeys in accordance with the rains. There is a wildness to Chad that’s not easily found in Africa anymore. As my father says, it is uniquely untouched.’