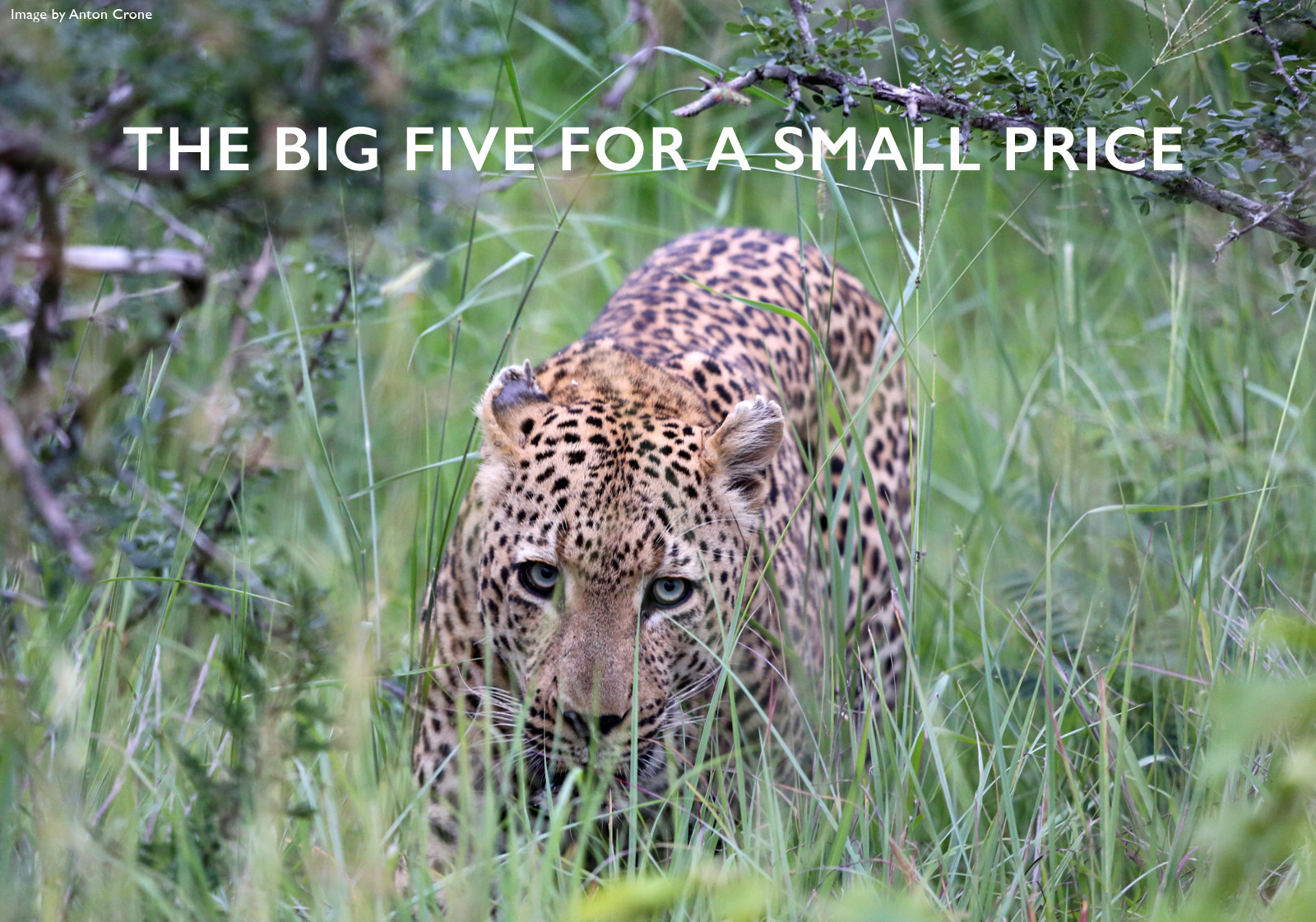 A LUXURY WILDLIFE SAFARI EVEN SOUTH AFRICANS CAN AFFORD

South Africans rejoice! We have found a luxury wildlife safari going for a song.

But going there none of the songs playing in the minivan were ones that I had requested. We were on a team-building trip, en route to Djuma Private Game Reserve. Africa Geographic’s advertising manager, Adie, had emailed the team asking for music preferences, but she had forgotten the Pink Floyd I requested. She played Steve Perry to make up for it, and while I belted out the lyrics of “Oh Sherrie” along with Adie, young Jeff and Georgina cringed, agreeing only that Steve “should’ve been gone.” We are a bunch who’s musical tastes range from Nickelback to DeadMau5 so we were clearly in need of team building, and there is no better equaliser than the bush.

Designed for single groups, you can have a corporate outing or an intimate wedding

We finally arrived at Djuma in the famous Sabi Sand Reserve in the greater Kruger National Park. Steve Perry had died along the way, and it was wonderfully quiet, my ears not yet tuned to the lively bush soundtrack that greeted us. One of the beauties of Vuyatela, our choice of the two accommodation options at Djuma, is that the lodge was totally ours, complete with private chef and game viewing vehicle. This luxury safari is designed for single groups – be it a corporate outing, intimate wedding, family reunion or a bunch of friends wanting to reconnect in the bush. The only thing you need to bring is your food and refreshments, which chef Luzile will prepare to perfection. The full compliment of staff will look after you, and give that luxury lodge experience. Be prepared though to pour your own drinks, and carry your own towel to the plunge pool on your private deck.

Vuyatela can accommodate ten people in five luxury suites. For larger groups of up to twenty, you can also book the nearby Galago Camp, which includes a guide, tracker and private safari vehicle. It’s not quite as well-appointed as Vuyatela, and doesn’t include a chef, but one can be arranged prior to arrival, or you can bring your own as there is additional accommodation for guests’ staff.
Most remarkable is the price – Vuyatela works out at ZAR1,400 per person per night, excluding food and refreshments. Other luxury lodges in the area cost between ZAR5,000 and ZAR8,000.

When we arrived, we were met by our private guide, Taxon. After settling into our chalets, we swapped the musical microbus for his game-viewing vehicle, which had even better vibes – a remarkable surround-sound system playing Sounds of the African Wild, on repeat. Accompanying visuals were in hi-def 3D, and within minutes of leaving the lodge we were staring down the gaping maw of a male lion. I was swapping my long camera lens for a wide because we were just too darn close.
As the lions yawned at us we caught the discreet sound of the two-way radio. After a short exchange Taxon quickly took off for what he told us would be ‘a special treat.’ The anticipation kept us silent – all the better to appreciate the soundtrack on the way, and we soon came across the other vehicle and the “treat.” The guests were gazing into a tall stand of grass, and we followed suit. ‘Look at the battery pack on that thing,’ Simon whispered in awe as a male leopard presented himself and ambled away through the long grass. This was the legendary Mvula (meaning ‘Rain’), and the most impressive leopard I have ever seen.

Taxon manoeuvred the vehicle to get ahead of the big cat. Mvula’s other two attractions are his eyes, and I focused on these as he prowled towards us, then he paused to gaze up at the girls on the back seat. Our travel consultant, Kelly, shook herself out of her revelry and got a great photo with her cheap and cheerful Samsung phone. I was a little envious of her position and, comparing images later, we all agreed hers beat mine, despite my being armed with a Canon 5D and an ostentatiously long lens. It was a reminder that it’s not about the equipment but how you use it, and that in Djuma you can get really close to the wild. I often found myself shooting with a 50mm lens.

The best of both worlds

The advantage of our own private game-viewing vehicle was that it gave us the freedom of a self-drive safari (no annoying guests who might want to see or do something different to you) with the added advantage of a professional driver/guide and tracker. The best of both worlds.

And then, the next day, we saw something completely different. We met a pair of field guides who take thousands of different people on a game drive every day. WildEarth Safaris, who are based in Djuma, broadcast a live game drive to computer screens worldwide every morning and evening. They took our marketing manager, Janine, out on one of their two camera vehicles, while I watched from the control room. At first, I was sceptical about live video being used to emulate a game drive, and a little envious of Janine’s front-row seat, but I was soon won over. Alternating between the two vehicles, the controller broadcasts the most unusual sightings and relays the most interesting questions, which viewers send by social media or email, to the guides. The guides expound on the questions and explain in detail what the animals they come across are doing, and why. While we were watching, Scotty, who had Janine on board his vehicle, expounded on the behaviour of a bull elephant in musth.

It was fascinating stuff, equally so for Janine who said afterwards, ‘The guide is so descriptive and gives so much more information because he has to keep the viewers engaged. It’s how every game drive should be.’ I realized how wonderful this is for educating and entertaining thousands of people about wildlife without impacting this pristine environment. It also meant I would be able to catch up on what Mvula and the other animals were up to from my desktop.
Within 24 hours of arriving in Djuma, we had spent quality time with every member of the Big Five. Djuma is a veritable catwalk for these creatures – not forgetting that the Big Five moniker is a hangover from hunting, a trophy tick list for people not quite as secure as Mvula appeared to be.
Between visiting these celebrities of the wild, we enjoyed the sights and sounds of the less-appreciated creatures – the backing singers and the choir so to speak – replete with a rhythm section led by woodland kingfishers and a baseline of hippos harrumphing from muddy wallows.

One day a rifle shot – a reminder of the poaching problem in the greater Kruger area – cut through this sublime chorus. Taxon radioed a report through and, further along the track, we chanced upon two camouflaged rangers who materialised magically from the shrubbery. Taxon reported the position of the shot – seemingly beyond the boundary of Djuma – and as we drove off I looked back to see that the camouflaged rangers had merged with the bush once more. As hard as their job is, I envied them their opportunity to commune so closely with the wild. Enquiring about it later, the source of the shot could not be ascertained.

Evenings were filled with banter about animal sightings – most often from the night drives when the lions had shaken off their slumber, and the sundowners had oiled our imaginations. One night we came across a pride of nine lions, mainly youngsters and lionesses, ambling along the track. One of the juveniles chased the vehicle, provoking panic in Adie, and a plea to drive faster. Of course, Taxon stopped so we could enjoy the spectacle. Tail to tail they walked along the side of the open vehicle. As they went by, the young males and the older mothers glared at us, assessing our little troop of furless primates. A whimper came from the rear of the vehicle, and then a cry as a lioness settled down beneath the overhanging rear seat. Eventually, the lions moved off, the chatter picked up as the tension eased, and you could sense the exhilaration the lions had inspired in our motley crew.

The chatter continued through the days and nights of this informal team-building outing. Before Djuma I couldn’t imagine Jeff, our quiet web guy, with anything other than the glow of a computer screen on his face. But in the light of the fire, this man who seldom utters more than cryptic lines of code came across as a diehard bush lover waxing lyrical about the day’s sightings. Suffice to say the gin also loosened his tongue. Our resident seafarers, Janine and Georgina, took the juniper juice in their stride. Like true sailors, they inspired the rest of the crew to stay up late.
And in the mornings?
No mutiny. Who could resist the allure of fresh air and wild sightings, and our tender minds were grateful for the softer sounds of the wild.