You are here: Home » Destinations » South Africa » KwaZulu Natal » King of the Pieds: the Pied kingfisher

King of the Pieds: the Pied kingfisher

The pied kingfisher (Ceryle rudis) is a water bird and is found widely distributed across Africa and Asia. Its black and white plumage, crest and the habit of hovering over clear lakes and rivers before diving for fish make it distinctive.

Males have a double band across the breast while females have a single gorget that is often broken in the middle. We as rangers often say that the females wear the nice bikini and the males a nice bow tie. They are usually found in pairs or small family parties. When perched, they often bob their head and flick up their tail.

This kingfisher feeds mainly on fish, although it will take crustaceans and large aquatic insects such as dragonfly larvae. It usually hunts by hovering over the water to detect prey and diving vertically down bill-first to capture fish. When not foraging, they have a straight rapid flight and have been observed flying at nearly 50 km/h. In Lake Victoria in East Africa the introduction of the Nile perch reduced the availability of haplochromine cichlids which were formerly the preferred prey of these birds. 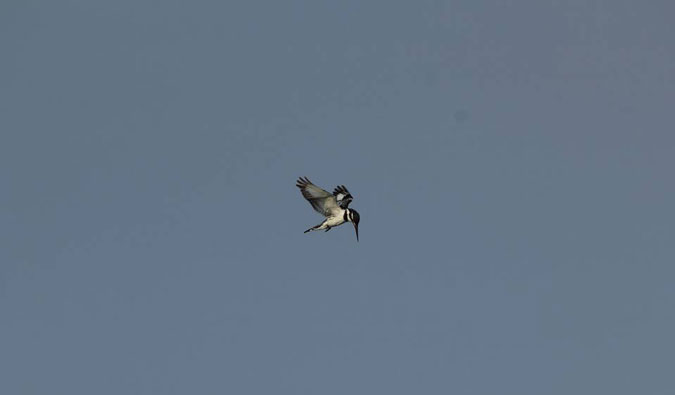 They can deal with prey without returning to a perch, often swallowing small prey in flight, and so can hunt over large water bodies or in estuaries that lack perches that are required by other kingfishers. Unlike some kingfishers, it is quite gregarious, and forms large roosts at night. When perched, the often bob their heads up and down and will sometimes raise their tail and flick it downwards. They call often with sharp chirruk chirruk notes.

For a small little bird this species of kingfisher is definitely very interesting in its behaviour – and to watch them hunting with their speed and agility never seizes to amaze me.

Makakatana Bay Lodge is a luxury 4-star rated lodge, situated on the banks of Lake St Lucia, the largest marine lake in Africa in South Africa’s iSimangaliso Wetland Park World Heritage Site. The lodge is run by the owners who are now the fourth generation family to live at Makakatana. Visitors have access to vast wetlands, undeveloped beaches and incredible wildlife.