You are here: Home » Wildlife » Animal Encounters » Death of Tait: The end of a legend

Death of Tait: The end of a legend

Recently the BBC aired the fourth episode of Dynasties – a nature documentary series that highlights five vulnerable or endangered species – with this particular episode focusing on the painted wolves of Mana Pools in Zimbabwe. It brought back floods of memories for Nick Dyer and Peter Blinston, founders of the Painted Wolf Foundation and authors to the book Painted Wolves: A Wild Dogs Life. For six years Nick has been tracking and photographing painted wolves on foot in the Zambezi Valley. For twenty years Peter has been doing all he can to save the painted wolf from extinction through his organisation Painted Dog Conservation.

One painted wolf stood out amongst the others for both Nick and Peter, and that was Tait – the alpha female of the Vundu Pack.

Just after the BBC had finished filming in 2015, Nick went into the Nyamatusi with Jealous Mpofu of Painted Dog Conservation to try and find Tait. She was very old and the rains were about to arrive. This was the last time anyone saw Tait and proved to be a very emotional experience for him.

Here is Nick in his own words about seeing Tait for the last time:

“I find Tait and her Vundu Pack on the banks of the Zambezi River in the remote wilderness area of the park. It has been a month since I last saw her and she seems to have aged considerably. She limps painfully, her last two pups are missing and a bulge protrudes from her belly that suggests mastitis.

“I crawl across the open sand on my bum, taking half an hour just to get close. She is no longer used to my presence, so I am cautious. Somehow, she seems to have shrunk. And while she is clearly weaker and frailer than the other wolves in her pack, none are challenging her position. She is still in charge and clearly revered and respected.

“Her alpha male, Ox, walks to the edge of the river and Tait follows behind. They stop and look out across the waters together with an air of gentle reminiscence.

“Tait turns and looks inland across the territory she has controlled for the last eight years. She is now ten years old and I can sense she knows that this is her last.

“She has been an incredible alpha female. Responsible for so many pups, grandpups and great-grandpups, Tait has made a significant contribution to the survival of her species. While she is near her end, her genes will flow on like the Zambezi.

“I look at her Vundu Pack. It is a remnant of its former strength. The individual wolves seem strong and healthy, but as a pack they are diminished. Now puppyless, I sense the joy has been drained from their existence and they are ready for a new beginning.

“As the sun starts to set, I take my last ever photographs of Tait. We make eye contact like we have so many times before. Looking into her tired eyes, I remember her hunting, fighting hyena and playing boisterously with her pups. I remember cradling her head after Peter darted her to remove her failed collar and feeling her warm heartbeat under my hot hand.

“She turns and walks away, and her pack rises to follow her. I can no longer photograph as the tears in my eyes won’t let me focus.

“This is the last anyone saw of her. Some say she was taken by lion. A natural death is rare in the bush. I honestly have no idea how she died.

“I just know she was ready and I am glad I could be with her one last time.”

Many people refer to painted wolves as wild dogs, a term which is also used around the world to describe domesticated dogs that have gone feral, rather than to refer to indigenous species of the Canidae family (of which the painted wolf is a member). To fully understand this interesting topic, read ‘What’s in a name? Dogs or wolves, painted or wild‘

Read more about these fascinating creatures in the story Painted Wolves, written by Nick Dyer 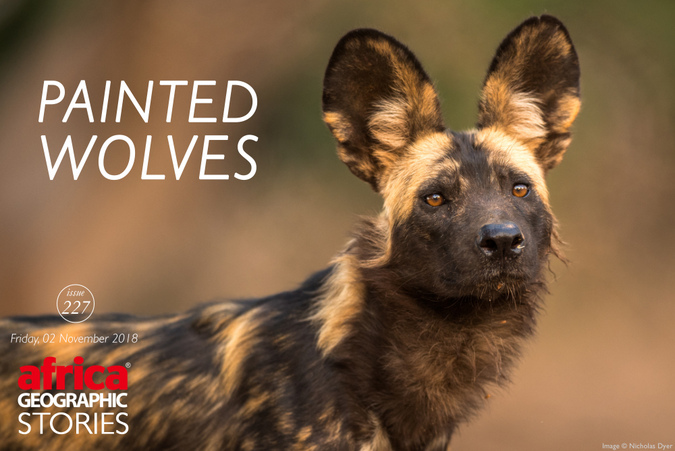 Nick grew up in Kenya and always had a passion for photography. After careers in finance and marketing, stuck behind a desk in London, he took the decision to return to Africa and turn his life around to dedicate it to photography, writing and wildlife conservation. He discovered the painted wolves of Mana Pools National Park and fell in love with them. Nick has spent much of the last six years living in a tent while following and photographing three packs on foot. See more of his photographs on his website, Facebook and Instagram page.